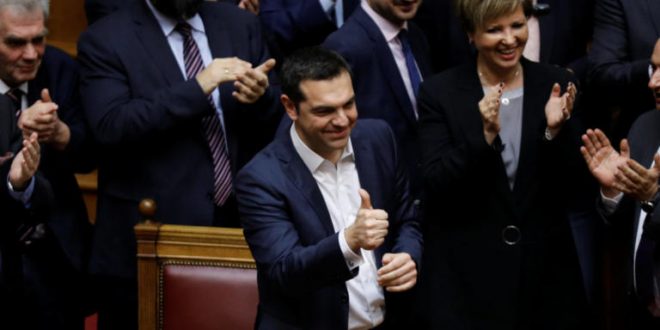 Prime Minister Alexis Tsipras won the confidence vote with 151 YES against 148 NO in Greek Parliament late on Wednesday, after a fierce debate that lasted two days. the Prime Minister won the confidence with the support of some independent lawmakers, one To Potami MP as well as the vote by four ANEL MPs. The vote of confidence became necessary after ANEL leader Panos Kammenos left the coalition over the Macedonia issue and the Prespes Agreement.

In his speech to Parliament, Tsipras had appealed for lawmakers’ support so that his government could work for “the country’s liberation from foreign coercion, economic frailty and the dominance of the corrupt elite.”

After his victory, he said “the Greek Parliament gave a vote of confidence in stability.” The government, he added, would complete its term “with the sole concern of addressing the needs and interests of the Greek people.”

Main opposition leader Kyriakos Mitsotakis accused Tsipras of imposing austerity to the Greek people. In another argument, he said that “vote of confidence means also vote for the Prespes Agreement.”

The leader of conservative New Democracy is a fierce opponent of the deal with FYROM – at least, in his public speeches – and said that if ND comes to power it will renegotiate the Prespes Agreement.

After the FYROM Parliament ratified the country’s name change into “North Macedonia”, now the ratification is in Athens court.

With 145 seats in Parliament, SYRIZA could pass the Agreement through. However, the Prime Minister has set the threshold at 151 votes, hoping again to win the support of the no-Syriza lawmakers.

Small opposition party To Potami that had declared to vote in favor of MAcedonia deal, is now divided, after Tsipras persuaded MP Danellis to support the confidence vote.

The deal is expected to come to Parliament next week. Until then, political parties and media are closely monitoring every dot and comma that may reveal the intention by opposition MPs  on whether they will vote in favor or not.