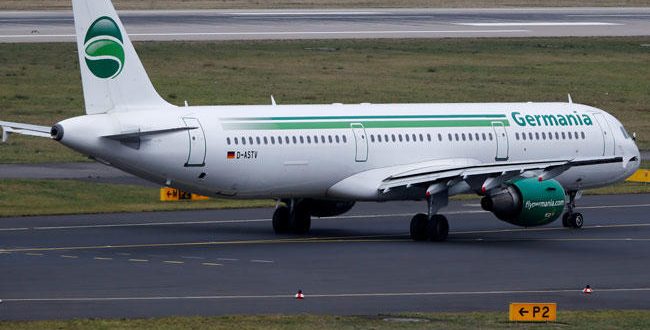 Berlin-based Germania Airline has filed for bankruptcy, and canceled all flights with immediate effect on Tuesday, February 5, 2019. The low-cost airline provided routes to some 140 destinations in Europe, Africa, and the Middle East, and offered full-service flights including food and baggage. The 37-aircraft airline flew around 4 million passengers a year.

In a statement the company said it applied for bankruptcy after failing to cover a “short-term liquidity problem,” and cited rising fuel prices and a stronger US dollar. There were also delays integrating aircraft into the fleet and a high number of “maintenance events”, the company said further.

After boasting of a monetary windfall of over €15 million ($17.16 million) in January, the company said last week that their staff had not received their salaries for the entire month of January.

The company advised customers to contact holiday operators to be rebooked.

“For passengers who have booked directly with Germania, there is unfortunately no entitlement to substitute carriage,” Germania added.

Air Berlin, which served around 30 million passengers a year and was Germany’s second-largest carrier, in 2017 filed for insolvency and ceased operations.

Many of its aircraft were absorbed by bigger rival Lufthansa.