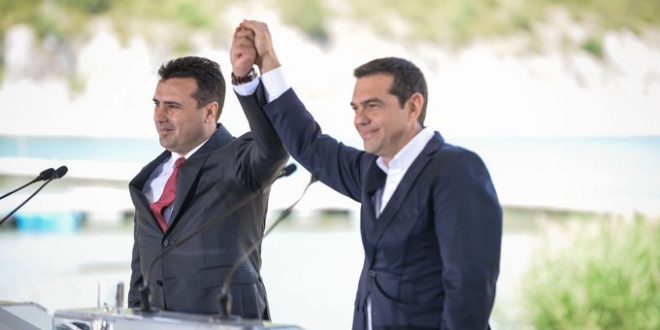 The Prime Minister of Greece, Alexis Tsipras and his counterpart from North Macedonia, Zoran Zaev have been officially nominated for the Nobel Peace Prize, state news agency amna.gr reports on Tuesday evening.

Tsipras and Zaev were nominated by European Parliament groups for having managed to end a 26-year-old conflict with the signing of the Prespes Agreement in June 2018.

The Prespes Agreement ended the dispute over the name of Macedonia despite fierce opposition in both countries.

Tsipras-Zaev nomination coincides with the official announcement of the government in Skopje that the Former Yugoslav Republic of Macedonia is now officially renamed North Macedonia.

A government press release said that as of Tuesday, the country is officially called the Republic of North Macedonia. A government official said the decision would be published in the government gazette later Tuesday.

As of Wednesday, the official said, the new name will be incorporated in official road signs — starting with one on the border with Greece, media report.

Nobel Peace Prize 2019 nominations are over 300, the Norway-based committee in charge announced. Among the candidates is also the UN refugee service.