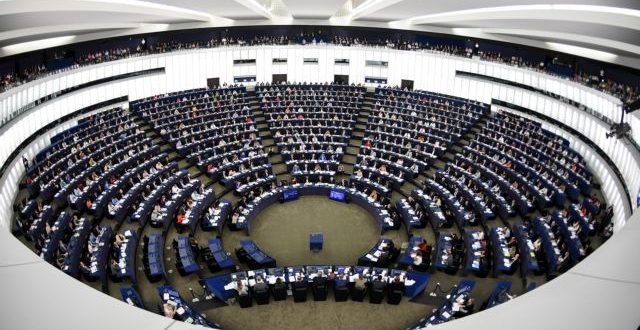 The European Union should formally suspend Turkey’s negotiations to join the bloc, EU lawmakers said on Wednesday in a symbolic rebuke of Turkish President Tayyip Erdogan, who Western governments accuse of widespread abuses of human rights.

“Sitting in a cell for 17 months without knowing what you are being accused of, that is reality in today’s Turkey,” Kati Piri, a Dutch centre-left EU lawmaker who sponsored the resolution told the plenary in Strasbourg.

She accused Erdogan of a “witchhunt against his critics”, referring to what the EU says is a crackdown on dissidents, the collapse of an independent judiciary and a turn towards authoritarianism that are incompatible with the bloc’s values of democracy and freedom of speech.

Forging a common European Parliament position on Turkey’s long-stalled EU bid, lawmakers voted 370 in favour and 109 against, with 143 abstentions, for an official freeze of the membership process, which would jeopardise some EU funding.

The resolution is not legally binding. EU governments have the final say in any suspension.

The resolution, which blasts the Turkish government, notes “Turkey’s important role in responding to the migration crisis” and its “great hospitality” in sheltering more than 3.5 million Syrian refugees.

At the same time, the resolution calls on Turkey to intensify its efforts to resolve all disputes on the basis of international law and in the context of good neighborliness, condemning the violations of airspace and the territorial waters of Greece and stressing the need to remove its “casus belli” resolution.

EP lawmakers make a special reference to Hagia Sophia, saying that they oppose any extreme view that promotes the alteration of  the character of the Museum as a historical-religious monument as well as its transformation into a mosque.

MEPs reiterate the EU Parliament position on a fair, comprehensive and sustainable settlement of the Cyprus issue based on a bi-communal, bizonal federation with a single international legal personality, single sovereignty and single citizenship and political equality between the two communities as defined in relevant UN Security Council resolutions in accordance with international law and the EU acquis and respecting the principles underpinning the EU. They call on the EU and the Member States to play a more active role in the successful conclusion of the negotiations.

Ankara dismissed the vote as meaningless and called it “worthless, invalid and disreputable”.

Ruling Justice and Development Party (AK Party) Spokesman Ömer Çelik rebuked approval of the resolution. ”This disreputable decision shows that the European Parliament is under the influence of far-right ideology,” he said.

Turkey’s Foreign Ministry rejected the recommendation, stating: “It is not possible for us to attribute any value to the one-sided and non-objective approach adopted by the European Parliament,” adding that the decision does not “make any sense.”

The EU process is not formally frozen but was faltering even before Erdogan’s purge of suspected plotters of a failed coup attempt in 2016 and his broadsides against Europe in 2017, comparing the Dutch and German governments to Nazis.

The negotia1tions, launched in 2005 after decades of Turkey seeking a formal start to an EU membership bid, dovetailed with Erdogan’s first economic reforms in power as prime minister from 2003.