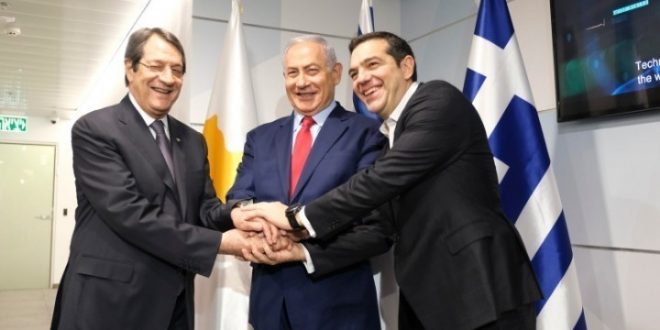 The 6th Trilateral Cyprus-Greece-Israel Summit, with the participation of the United States, begins in Jerusalem Wednesday afternoon to advance energy and security in the Eastern Mediterranean and discuss also economy and migration.

According to government sources, Tsipras will underline that the safe transfer of energy resources to the EU is one of the main pillars of the Greek foreign policy.

The signing of the Intergovernmental Agreement to promote the EastMed gas pipeline will be announced within the next few days, the same sources said stressing that “the role of the three countries in security and energy developments in the Eastern Mediterranean is strengthened.”

As the government sources pointed out, this meeting highlights the US support for the trilateral cooperation of Greece, Cyprus and Israel, and marks the reinforced role of the three countries in security and energy developments in the Eastern Mediterranean. It is noted that during the Greek-US Strategic Dialogue meeting last December, the cooperation of this trilateral scheme with the US was discussed, reflecting the overall upgrading of our country’s relations with the US.

In particular, officials are expected to discuss developments in the Eastern Mediterranean and cooperation in the areas of energy, security and defence, economy and migration.

Special focus will be given on energy cooperation talks amid major changes in the region’s energy map, in which our country plays an important role, as Athens has repeatedly stressed.
Tsipras’ message.

According to the same sources, the Prime Minister will underline that the secure transfer of energy resources to the EU, through the increase of sources and channels, is one of the main pillars of Greek foreign policy.

At the same time, the new LNG pipelines will be discussed with the use of Revythoussa and the planned FSRU in Alexandroupolis.

The State Department said Pompeo, while in Jerusalem as part of his visit to Lebanon and Kuwait, will “also participate in a meeting with Israeli, Cypriot, and Greek leaders to discuss key energy and security issues facing the Eastern Mediterranean region”.

Pompeo is expected to hold bilateral contacts with the three leaders. This will be followed by a meeting of all four together which will later include delegations.

Last week, the State Department had praised the Eastern Med in “moving forward in exploring and exploiting for the benefit of their people – Greece, Cyprus, Turkey, Egypt, Israel”, their offshore resources.

The Cyprus government spokesman on Sunday told CNA, the signing of the EastMed pipeline, was unlikely to go ahead as any developments are expected after the European elections. Rome’ presence, who is a partner of the gas pipeline project that aims to link Israel, Cyprus, Greece and Italy, is required for the signing. [amna, cyprus-mail]

PS Important to know that Ankara is probably fuming for being left out of the energy cooperation in Eastern Mediterranean Sea. Greek Foreign Ministry, Giorgos Katrougalos, currently at Israel Summit will fly to turkey later on Wednesday and meet his counterpart Mevlut Cavusoglu.