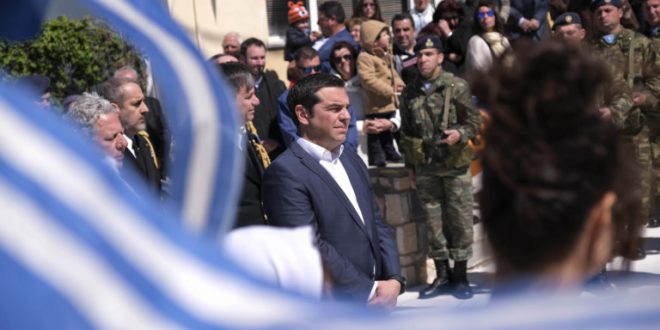 Turkish fighter jets harassed the helicopter carrying Prime Minister Alexis Tsipras to the remote island of Agathonisi in north Dodecanese. The jets forced the helicopter of the Greek Air Force to fly at low attitude until they were intercepted by Greek F-16s. Tsipras was visiting the small island in the north of Dodecanese group in order to attend the parade on 25. March, marking the Greek Revolution of 1821 against the Ottoman Empire.

According to media information, two pairs of Turkish F-16 fighter jets violated Greek airspace – FIR Athens – between the islands of Chios and Samos. They tried to harass the Chinook helicopter reaching as close as 4 nautical miles and flying at 6,000 feet. At this point they were intercepted by Greek fighter jets.

“You waste fuel and resources,” Tsipras said in a wry tune addressing the country’s neighbors.

“Greece today is a force that everyone must take into account. Not as an aggressive force but as a force of peace and cooperation in the Eastern Mediterranean and the Balkans. As a force that promotes dialogue and understanding between peoples and an energy hub….This is a message that I also want to send to our neighbors. Our neighbors who must understand that, in the Aegean, only cooperation, understanding and joint development has prospects – not differences, posturing, not fake bravado and not pointless attacks.”

After revealing the harassment incident, Tsipras said that the Turkish side “should know that these are foolish actions that are wholly pointless, they simply waste kerosene and petrol for no reason is the message that I want to send them.”

“Firstly, because we will always be there to defend our territorial integrity and, secondly, because the Greek prime minister will go to even the most remote island of our country, to the most remote and outlying corner, even if he has to swim there,” Tsipras added.

Concluding, the prime minister said his message to all sides was that Greece was open to dialogue and understanding but also prepared, if necessary, to “do what we know how to do and what our ancestors have taught us to defend our rights and sovereignty.”

The harassment takes place a day, after President Recep Tayyip Erdogan provoked Greeks saying that he would convert the museum of Hagia Sophia into a mosque.

There used to be a memorandum between Greece and Turkey to respect national holidays in both countries. Theoretically, the agreement is still valid.

But who said that Turkey honors its signature?