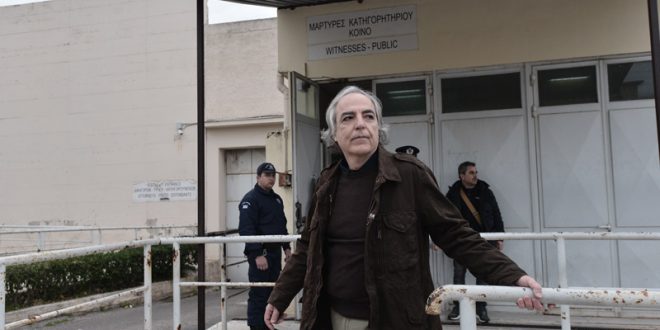 May 23, 2019 Greece Comments Off on Supreme Court rules in favor of furlough for 17. Nov convict Koufontinas 169 Views

Greece’s Supreme Court has dismissed decision of the court in Volos that had denied the seventh furlough for Dimitris Koufontinas, the convict of terror organization “17. November.”

The penal section of the Court accepted the chief prosecutor’s appeal asking the dismissal of the Volos court decision.

The reasoning of the Supreme Court is that Koufontinas meets the “formal requirements of the law granting furloughs to those convicted several times for lif eimprisonment.

Koufontinas has been sentenced to 11 times life for the murders of several people, including US and UK diplomats.

Following the Supreme Court ruling, the court in Volos will have to meet again and reconsider its earlier decision.

Anarchists have committed several vandalism attacks at public buildings, political parties offices and election campaign stands as well as the residence of the US ambassador in Athens, ever since Koufontinas started a hunger strike on May 2.

The 61-year-old convict remains hospitalized in Intensive Care Unit since last week due to his health deterioration.

Prompt was the response by new Democracy that promised to change the furlough law if elected.