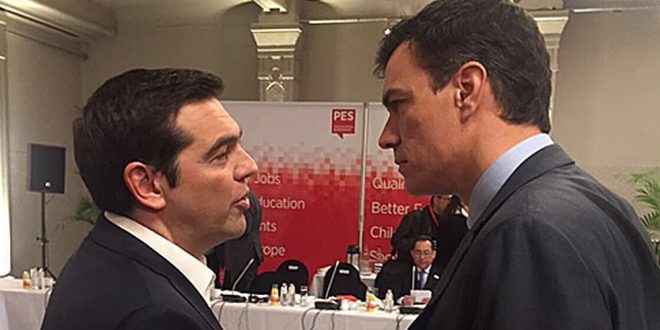 Prime Minister Alexis Tsipras had to leave the European Council Summit in Brussels and return to Greece due to his obligations less than a week before the general elections on Sunday, July 7.

“We are close but not there yet,” he told reporter commenting on whether European leaders had reached agreement on who should occupy the top jobs in key European Union institutions.

Form the very beginning Tsipras supported Dutch Frans Timmermans for the position of the President of the European Commission.

While Timmermans was still a top candidate on Monday, the EU leaders could not agree on him as the whole procedure is an issue of tough bargain with a domino effect. If X occupies A position, then Y should occupy B, etc etc.

Can Greece let EU leaders do as they wish, especially in a procedure where votes and consensus are essential? It cannot. Therefore, Tsipras will be represented by his Spanish counterpart, socialist  Pedro Sancez.

Tsipras left Brussels for Crete where a big elections campaign rally is scheduled in Iraklio for Monday evening.

BTW: there was a rumor circulating in Brussels that Tsipras may be also candidate for an EU top job. The rumors were not spread by Greeks, whether of SYRIZA or of any other party.

Sadly, Tsipras is still an active Prime Minister, at least, until next Sunday. He may apply for an EU top job in a few years….