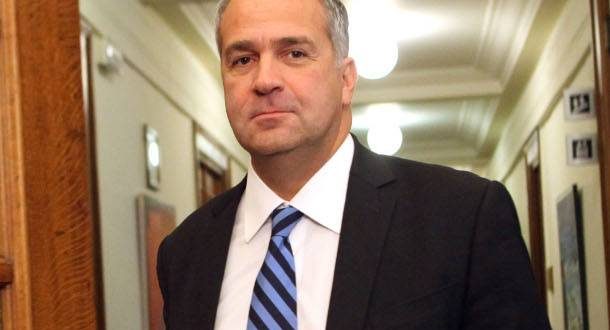 Israel will shun new Greek Minister with antisemitic past

Israel will not work with Greece’s new Agricultural Development and Food Minister Makis Voridis because of his antisemitic past, a senior diplomatic told The Jerusalem Post on Wednesday.

Mitsotakis is considered strongly pro-Israel; on Sunday evening, Prime Minister Benjamin Netanyahu called to congratulate him on his victory.

World Jewish Congress head Ronald Lauder issued a statement after the election saying that Mitsotakis “is a true ally of Israel and has always demonstrated deep support and friendship for the Jewish community in Greece.”

“We look forward to working together with him in the months and years to come, and trust that he will include among his top priorities the serious need to eradicate any and all remnants of antisemitism and neo-Nazi ideology from within the country.”

But Voridis, his new ministerial appointee, has a history of antisemitic actions and statements.

Lauder noted that the extreme-right and antisemitic Golden Dawn Party failed to pass the 3% election threshold, and thus will not have representation in the new parliament. It had 18 seats in the outgoing parliament.

However, according to Filippa Chatzistavrou, an assistant political science professor at the University of Athens, a significant part of Golden Dawn voters migrated to New Democracy (ND). In an interview with France24 news, she said that ND is no longer the liberal party it once was, but has a “new ideological profile” that includes voices from the far Right.

Voridis is considered one of those voices. He founded the now defunct ultra-nationalist Hellenic Front Party, and ran for parliament in 2000 alongside a man who wrote a 1,400-page screed about the Jews. And in 2005, he merged with a party whose leader – George Karatzaferis – blamed the Jews for 9/11 and said after Operation Cast Lead in 2008 that “the Jew smells blood.”

Sabby Minos, a Greek Jew who made aliyah, wrote in Haaretz in 2012 that Voridis has “a long history of Holocaust denial, antisemitism and xenophobia, including physical threats to Jewish families and leading groups of thugs against immigrants and leftists.”

Minos wrote that when the new Greek agriculture minister was a student at the elite Athens College high school – a school he himself attended – “Voridis formed the fascist student group ‘Free Students’ that painted the walls with swastikas and saluted each other using the Nazi-era greeting ‘Heil Hitler.’”

Voridis joined New Democracy in 2012 and was named health minister in 2014 during the last ND government under then prime minister Antonis Samaras.

After the small Jewish community protested this appointment, Voridis wrote a letter expressing his commitment to “putting an end to antisemitic racist prejudice, which is an outright violation of human dignity.”

At the time, Voridis’s appointment replaced another far-right politician with an antisemitic past, Adonis Georgiadis, who was also appointed on Tuesday to the new government – this time as development and investment minister.

Georgiadis owns a publishing house that sold and promoted an antisemitic book – The Jews, The Whole Truth – written by Konstantinos Plevris, who describes himself as a “Nazi, fascist, racist, anti-democrat and antisemite.” According to JTA, Georgiadis in the past has said that “all major banks belong to the Jews” and that “the Jewish lobby” would determine the fate of Greece’s foreign debt.

The Foreign Ministry in Jerusalem issued a statement on Wednesday, saying that it is “studying” the new composition of the Greek government and the significance of Voridis’ appointment. Though not mentioning him by name, the statement said that the new minister is known for “racist and antisemitic positions.”

Another note, however, was struck by vice chairman of the World Zionist Organization Yaakov Hagoel, who called on Mitsotakis to cancel the appointment. Hagoel said he was “astonished” and that “it is clear that Mitsotakis is a supporter of Israel and the Jews, but it is forbidden to appoint to the government a clearly antisemitic minister.”  – story via Jerusalem Post