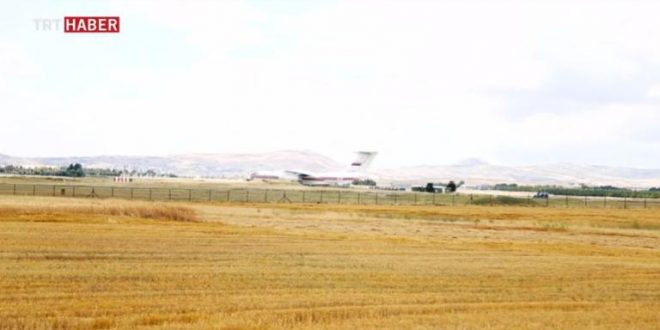 “First batch of equipment of S-400 missile defense system, which is procured to meet Turkey’s air and missile defense need, has started to arrive at Mürted Air Base in Ankara as of July 12, 2019,” the ministry said on Twitter.

Speaking to reporters, Foreign Minister Mevlut Cavusoglu said that that “delivery procedure is being conducted without problems and in accordance with the purchase agreement of the S-400.”

The agreement between Turkey and Russia was signed in April 2017.

According to Turkish media, the 120 missiles will be transported to Turkey per vessels and will be expected in September.

So far there has been no official reaction by the US that has strongly opposed the purchase and threatened to exclude Turkey from the F-35 fighter jets program.

However, the US efforts had no success.

U.S. officials had urged Turkey to buy U.S. Patriot missiles, arguing the Russian system would be incompatible with NATO systems and expose the F-35s to possible Russian subterfuge.

Turkey, however, emphasized the S-400 would not be integrated into NATO systems and would not pose a threat to the alliance.

Turkey has urged formation of a commission to clarify any technical issues, but the U.S. has failed to respond to this proposal.

Worth noting the highly symbolic role of the Mürted Air Base of the Turkish Air Force, located northwest of Ankara. The air base was used by pro-coup soldiers during the July 2016 coup d’état attempt. Government forces bombed runway thresholds to prevent pro-coup forces from landing or taking off.