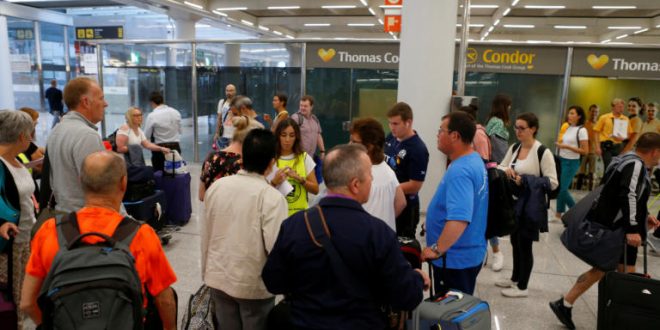 Thomas Cook: 50,000 holidaymakers stranded in Greece. What To Do

They are to be repatriated in the coming days, Theoharis told Skai TV on Monday morning.

The first 22,000 are to be repatriated over the next three days. The first aircraft are scheduled to land on Zakynthos, Kos and Corfu, he stressed.

According to local media, two airplanes are to repatriate Cook customers from Kos.

A total of 15 airplanes are expected to bring Cook’s customers back home from Greece.

He added that the British Civil Aviation Authority has already started the repatriation, the Authority will come up also for their accommodation as of today.

According to the President of Tour Operators of Crete, Mihalis Vlatakis, some 20,000 holidaymakers of Thomas Cook are currently on the island. He described the collapse as an “earthquake of 7 R with its tsunami to be seen due time.”

The damage for the local community and the hotels is immense as 80% of the hotels in Herakleio had Thomas Cook packages, said the Herakleio Hoteliers Association.

400,000 tourists have landed on Crete this year, local media report.

More than 3,000 Thomas Cook customers are currently on the island of Corfu, the president of Corfu Hoteliers, Babis Voulgaris said on Monday morning. “The majority of them are British, but there are also French, Germans and citizens of other European countries,” he stressed adding that “several hundreds were supposed to start their vacations today and they will not come.”

Voulgaris stressed that “hoteliers have not been paid yet for the tourist packages.”

Speaking to Greek television channels hoteliers said that they will claim their payments through the legal way.

“Obviously the obligations of Thomas Cook to tourist facilities is a legal issue that we also have to look at. Of, course, there will be damage,” Theoharis added.

Greece is the company’s second most important foreign destination and so this will impact the Greek economy.

There are reportedly Cook’s holidaymakers also in other Greek regions like in Macedonia.

Stranded in Greece? What To Do

The British Civial Aviation Authority is urging Thomas Cook customers who are currently abroad to visit the website www.thomascook.caa.co.uk and go to the airport only if they have an alternative flight.

The repatriation operation starts today, Monday, September 23, is expected to last until October 6, 2019.

The  world’s oldest travel firm Thomas Cook  collapsed on Monday, stranding hundreds of thousands of holidaymakers around the globe and sparking the largest peacetime repatriation effort in British history.

In a very last effort to avoid collapse, Thomas Cook held talks with the British government on Sunday. The talks did not bring any fruits.

We are sorry to announce that Thomas Cook has ceased trading with immediate effect.

Prime Minister Boris Johnson revealed that the government had rejected a request from Thomas Cook for a bailout of about 150 million pounds ($187.1 million) because doing so would have set up a “moral hazard.”

Founded in 1841, Thomas Cooks survived two world wars, but it blamed the upcoming “Brexit” for its financial collapse.

The company ran hotels, resorts and airlines for 19 million people a year in 16 countries. It currently has 600,000 people abroad, forcing governments and insurance companies to coordinate a huge rescue operation. 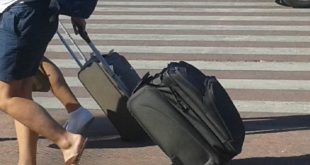