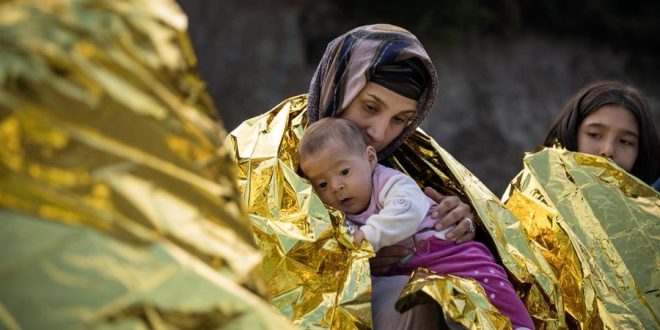 Head of UNHCR-Greece appeal: Refrain from statements that would trigger hate against refugees

Over the last couple of days, ministers of the Greek government but also Prime Minister, Kyriakos Mitsotakis, have been promoting a new policy claiming the increase of arrivals on the islands of the Eastern Aegean Sea is a migration issue and not a refugee crisis.

Furthermore, they claimed that the majority of new arrivals are “economic migrants,” suggesting that they do not come from warn-torn countries.

The representative of UN High Commissioner for Refugees in Greece, Philippe Leclerc, puts things right and calls on the government to refrain from statement that could trigger hate violence.

It’s basic numbers that are publicly available & collected by the UNHCR. It’s not even a slight 52-48 balance – the overwhelming majority of sea arrivals to Greece this year – over 90% – were from conflict zones. They were not merely migrants

Since May, more children, women and men are reaching Greek Aegean island shores. They are rescued by the Hellenic Coast Guard and are directed to reception centers which have been severely overcrowded for long months. The large majority of them originate from war-torn countries. Most are Afghan and Syrian families, while other originate from the Democratic Republic of Congo, Palestine, Iraq, and Somalia.

All are human beings and should be treated with humanity and dignity. It is the duty of every State to manage its borders in a protection sensitive way and ensure that those seeking protection are informed and have access to fair and efficient asylum procedures. Greece has contributed since its inception to the development of the institution of asylum, which in its present form was affirmed and enshrined in the 1948 Universal Declaration of Human Rights and the 1951 Convention on the Status of Refugees to which Greece is Party and which became an integral part of European Union law. The principle of non-refoulement contained in the 1951 Convention has even acquired the status of a customary norm of international law. It is the responsibility of the Hellenic Republic to save and protect those who seek its protection. It is also the responsibility of all EU countries and the European Commission to assist the Member State receiving by far the most arrivals in the Mediterranean region in 2019.

UNHCR will continue to assist the Greek Government in supporting the people arriving on the islands and transfer as many asylum-seekers as are authorized to continue their procedure on the mainland. We will continue to assist the government to create dignified accommodation and reception conditions with the funding of the European Union. Already we provide 25,500 places in apartments for some of the most vulnerable asylum-seekers and refugees. We will also ensure the exercise of our main protection mandate, by providing advice on the reform of the current asylum procedure system, as per our institutional role in the 1951 Refugee Convention and through the consultation process announced by the Greek government.

UNHCR will further advocate for responsibility-sharing among European States and in particular, to quickly ensure the protection in Greece of the high number of unaccompanied children, hosted in precarious conditions, as well as to open up in solidarity with Greece relocation places to other European States in a prompt yet careful way.

For the institution of asylum to serve its purpose on a national, regional and universal basis, it requires that fair and efficient procedures are in place, so that people in need of international protection can access that protection, while those not entitled to protection are given a negative response, their right to appeal is respected, but if confirmed should be returned to their countries of origin in dignity and after voluntary return has been promoted.

During the 30 years I worked for UNHCR, I have had the privilege to work and attempt to protect refugees, stateless people and those internally displaced in their country, as well as on certain occasions to help them return and reintegrate in their countries of origin or integrate in their asylum countries. This work has taken me to former Yugoslavia, across Africa, in Afghanistan, in Syria, and to EU Member States and Switzerland.

I have spent the last four years in Greece, while the country faced a severe economic and social crisis. And yet, throughout this time, I have seen and have been impressed by the commitment and solidarity of so many Greek citizens, local communities — both on the islands and on the mainland, by mayors and civil servants, NGOs, priests, and across the spectrum of civil society. I humbly and respectfully, but also firmly, appeal to all, to refrain from statements which could directly or indirectly  change this general attitude. Otherwise, hate and violence can easily re-emerge.

Speaking to state broadcaster ERT, Kalliopi Stefanaki from the UNHCR reminded that “refugees are not only Syrians” and that “more than seven out of ten Afghans are recognized as refugees,”  She added that “the vast majority of arrivals remain refugees.”

On Tuesday, Development Minister Adonis Georgiadis claimed that “Afghans are not refugees. […] Refugees for us are considered only those coming from Syria and they are 7%. 93% are illegal immigrants.”

PM Mitsotakis said in the Palriament on Friday that “Syrians are only 2 out of 10 arrivals, while 50% are from Afghanistan and Pakistan and sub-Saharian Africa.”

PS Until the Greek government finds out how many the Syrian refugees are and also agree upon the numbers, Syrians still make more than 20% of arrivals.