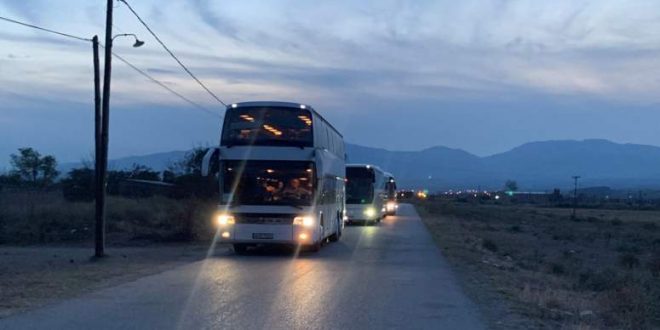 Giannitsa, Serres, Kos, Leros… No a day passes without local communities to protest the resettlement of refugees and migrants to the Greek mainland or from one island to another.

Residents of Paralimni by Giannitsa in North Greece blocked the roads to prevent refugees to settle in local hotels. A day earlier, it was inhabitants of Kos led by the local major who prevented refugees disembarking form a ferry boat. And the day before it was inhabitants of Leros who staged a protest against refugees and migrants resettled by government initiative.

In Paralimni some 50 locals set up blockades to prevent two touristic buses with 100-150 refugees from reaching local hotels. After several maneuvers, the buses reached the hotels and the refugees, vulnerable groups from the islands, managed to settle there under the protection of riot police.
The protest lasted  from 1 to 7 o’ clock Sunday morning, the locals left the area chanting slogans against the refugees. Earlier they had opened a banner reading “Deport the illegal migrants from Greece. Close the borders. Solidarity with Greeks.” 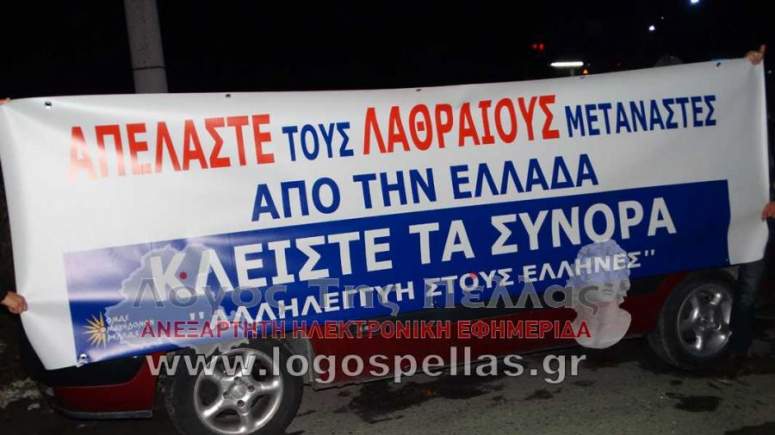 The local protesters went to the police station to file a lawsuit against anyone responsible, claiming that they were not informed in advance about the refugees’ arrival.
A similar incident took place in Serres, when a group of locals blocked a bus transporting refugees to Sidirokastro. The bus had to halt at the tolls of Egnatia highway for quite some time until the locals went home. 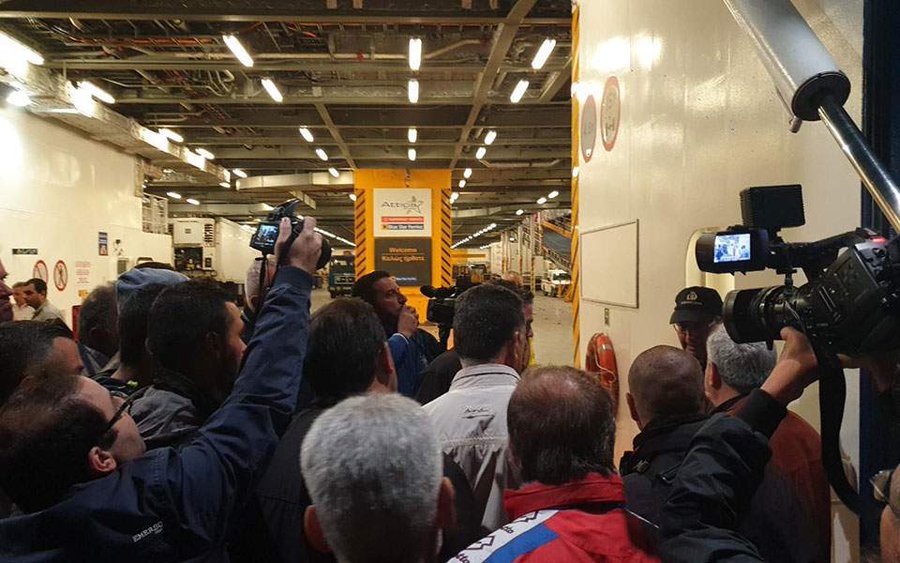 In the early morning hours of Friday, locals blocked the disembarkation of 75 refugees on the island of Kos. 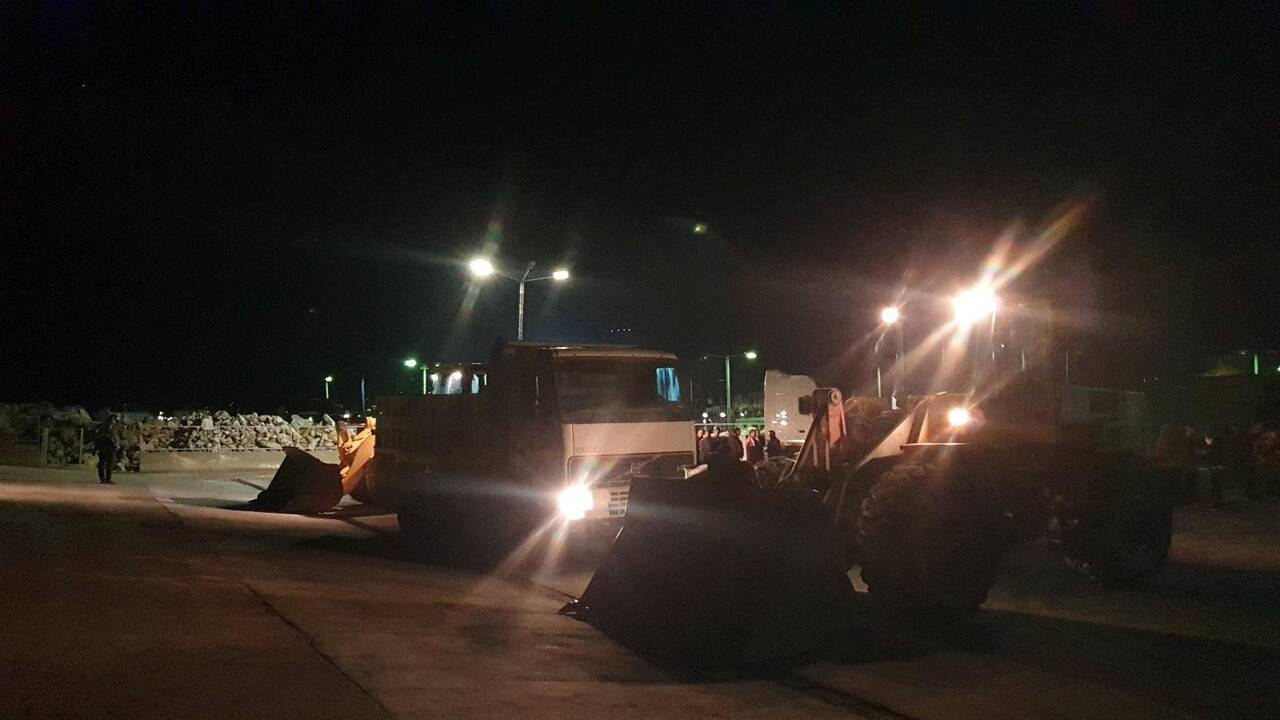 The protest was led by the mayor of the island who had deployed municipality vehicles.
The ferry boat had picked up the refugees from the island of Kastelorizo. The mayor told media that no more migrants will be allowed to Kos where the hotspot is overcrowded with more than 4,500 people.
A day earlier, locals prevented the disembarkation of 50 refugees coming from the island of Symi. The mayor described as “unacceptable” the situation saying that the island hosts 3,000 people when the facilities are for just 800. “We have people sleeping on the beach with just a blanket,” he stressed and warned that the refugees’ and migrants’ lives were at risk.

It was the mayor who had called on locals to block the port and prevent the ship from docking.
As the local communities rise up against the arrivals of refugees and migrants in their areas, the government continues to trasnfer them to the mainland.

“The government plans to move 5,000 migrants to the mainland over the next 15 days,” a senior government official told foreign media on Sunday.
With protests spreading, Interior Minister, Takis Theodoriakos, called on all Greeks to help. He stressed that the country cannot receive “unlimited number of refugees and migrants.”
there an organized effort to decongest the islands of Lesvos and Samos he said.
1,000 people are scheduled to be transferred in the next 24 hours.
However, despite the government efforts to ease the burden of the islands, new arrivals are recorded each and every day. In October alone, 6,850 people arrived on the islands of the eastern Aegean Sea. “40,000 refugees and migrants arrived in the last four months,” said Alternate Foreign Minister in charge of Migration Police, Giorgos Koumoutsakos, on Sunday. 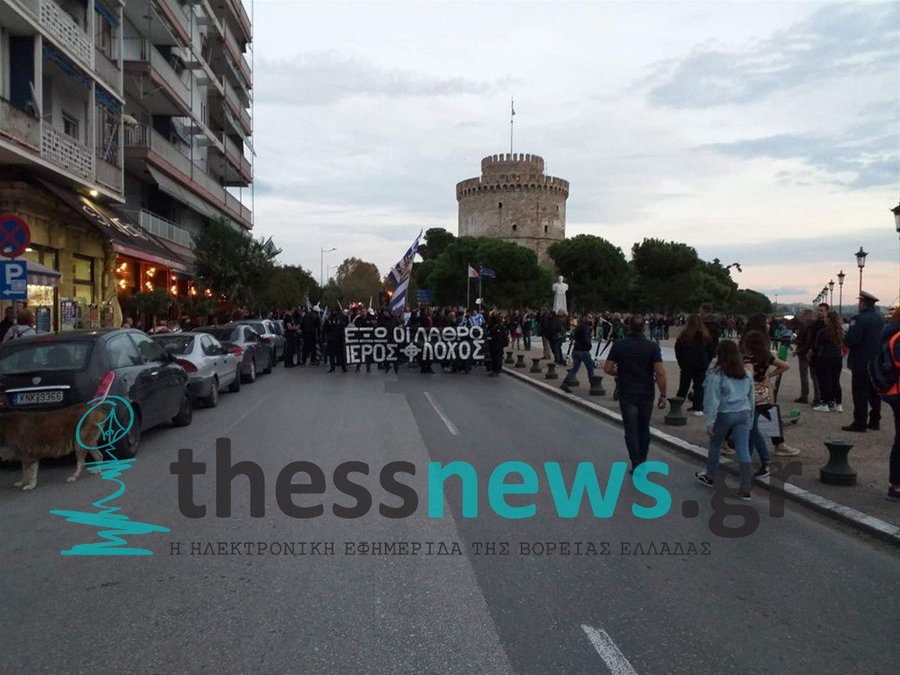 Ultra-nationalists demonstration in Thessaloniki. “Illegals Out”
In Thessaloniki on Sunday, two protest rallies were held one against the trasnfer of refugees from the islands and one in favor.