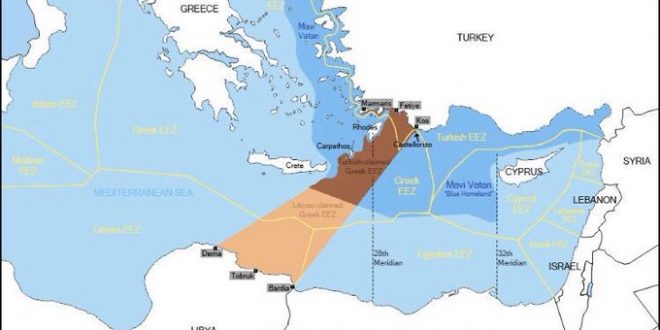 The Turkish Parliament ratified the memorandum of Understanding with Libya on Thursday evening. The MoU is in fact an Agreement renamed into Memorandum in order to avoid ratification by the Libyan Parliament that has disagreed with it.

The pseudo-MoU has already condemned by Greece, the EU, US, Russia, Egypt, Israel and the Government of East Libya led by General Hafter.

The deal establishes 18.6 nautical miles of a continental shelf and Exclusive Economic Zone boundary line between Turkey and Libya, as shown in a map tweeted by Turkish Foreign Minister diplomat responsible for maritime issues. 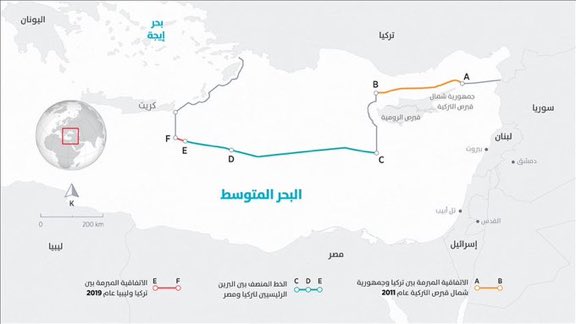 “The coordinates agreed with Libya coincide with the legal position expressed in that letter and are fully compatible with international law, including the U.N. Convention on the Law of the Sea (UNCLOS),” the Turkish diplomat noted even though Turkey has not signed the Convention. 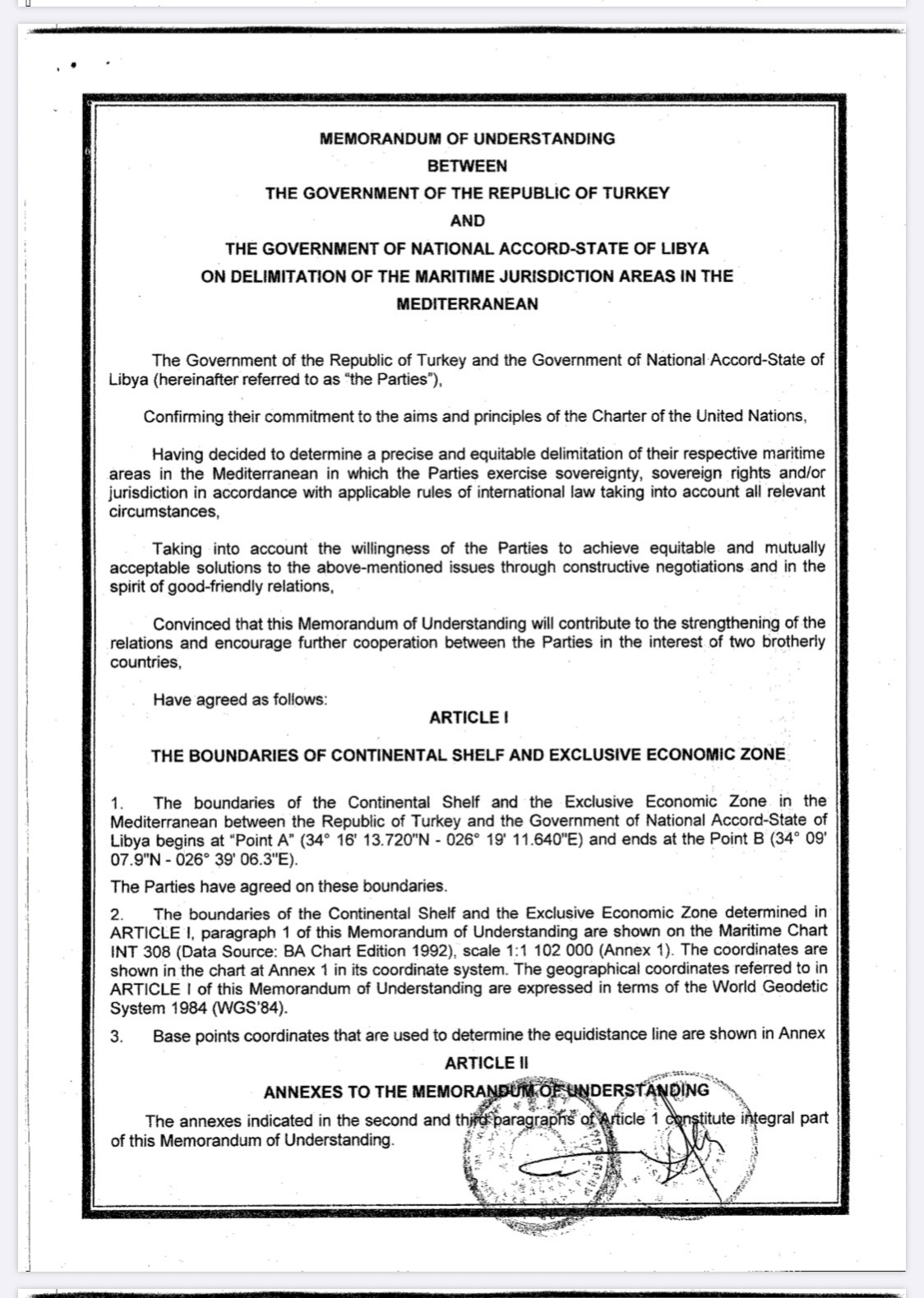 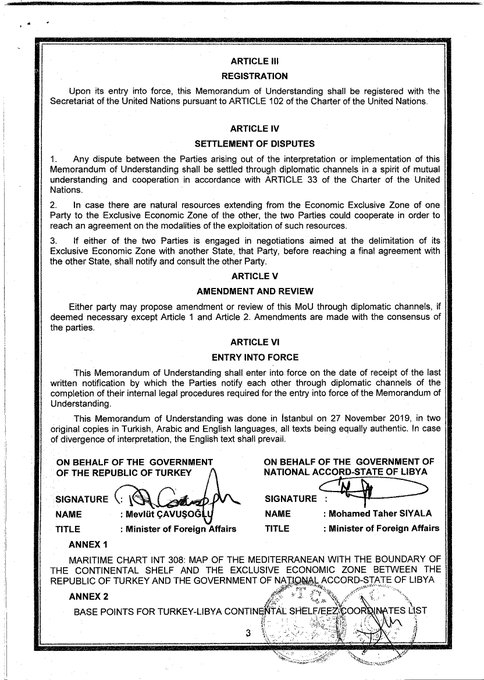 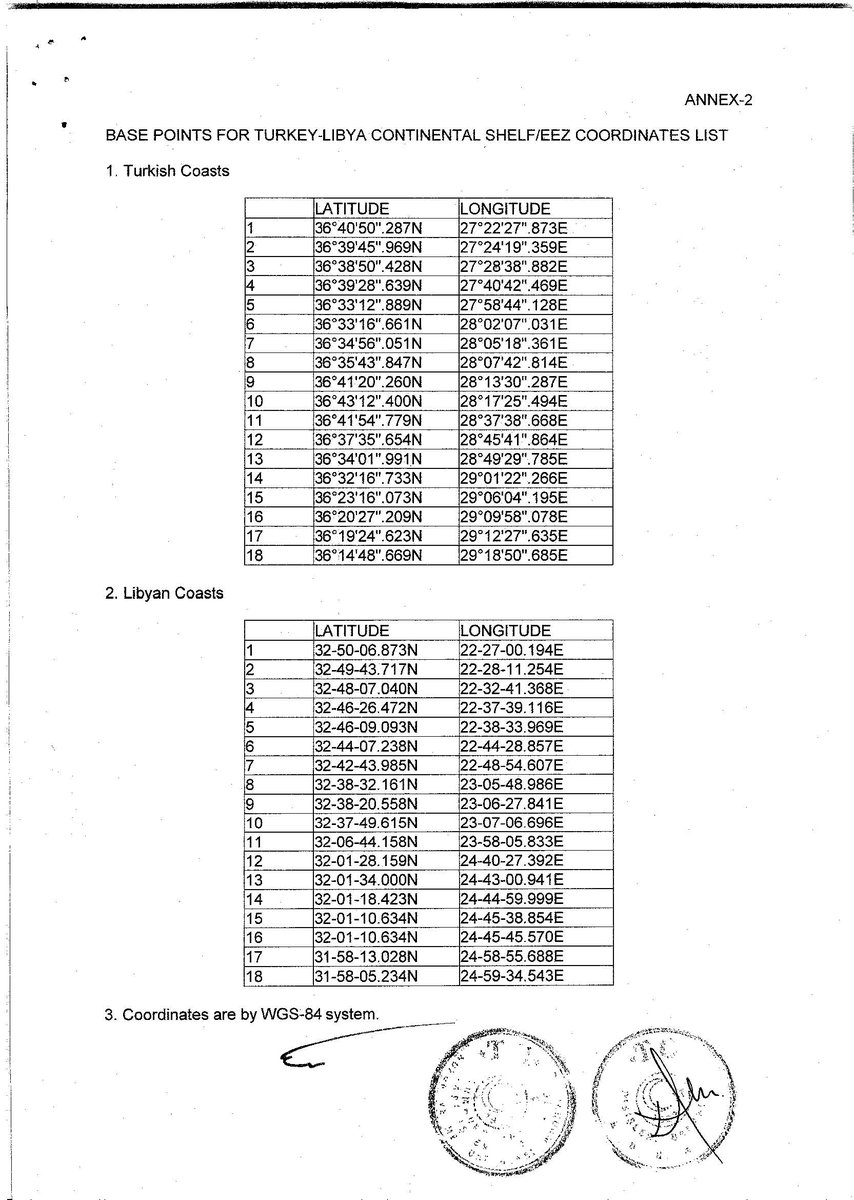 Turkey argues that the islands which lie on the opposite side of the median line between two mainlands cannot create maritime jurisdiction areas. Turkey also highlights the importance of comparative coastal lengths and the principle of equitable delimitation. Accordingly, it argues that the Greek islands and the western front of Cyprus should not be given any maritime jurisdiction other than territorial waters.

“The agreement with Libya does not completely resolve disputes concerning maritime jurisdiction areas in the eastern Mediterranean, but Ankara sees the deal as an important advantage to support its legal and political arguments,” comments Libyan News Observatory  almarsad

The text of the purported MOU is indeed peculiar and uses language and implication that is not in keeping with a memorandum.

For example, in Article IV it states that “Any dispute between the Parties arising out of the interpretation or implementation of this Memorandum of Understanding shall be settled through diplomatic channels in a spirit of mutual understanding and cooperation in accordance with ARTICLE 33 of the Charter of the United Nations.” A Memorandum of Understanding is a serious agreement, however they are never legally binding unless they become full legal agreements that follow all stipulations required for its force. What is interesting is that Article 33 states that any dispute that is likely to endanger the maintenance of international peace and security should first be addressed through negotiation, mediation or other peaceful means, and states that the Council can call on the parties to use such means to settle their dispute. It is therefore baffling why an MOU would have such inclusion of possible dispute that would require settlement through a serious recourse to Article 33? Unless, of course, the MOU was not really an MOU but was full fledged and binding agreement.

The entire Article IV section, and its detailed breakdown of dispute clauses is unfamiliar to a typical MOU and once again indicates that the am of the text more serious than it was made out to be to the Libyan public.

More importantly, in Article VI of the GNA-Turkey maritime Memorandum of Understanding it states indicates that each party shall refer it to its consecutive parliament for approval and ratification. This explains why the Turkish party referred the said MOU to its parliament today because it is a procedure related to agreements between states and not memorandums.

However, the Tripoli-based Government of National Accord has not sought approval, neither it is willing to seek approval, from the only legitimate Parliament of Libya, the House of Representatives. The GNA is therefore in breach of not only of the Skhirat Agreement, but given the stipulations here it also breaches its own MOU, that is the “internal legal procedures” it must follow for the agreement to become effective. The GNA has failed to meet the stipulated requirements. It is clear from the text of the agreement that this is not an Memorandum of Understanding but rather a full fledged agreement between two countries.

After examining the document diplomatic sources in Libya, Greece, Egypt, Cyprus and other affected countries have said that the the memorandum of understanding on maritime borders signed between Turkey and the Tripoli-based Government of National Accord has no legal standing. The content of the document contravenes the provisions of the international Law of the Sea. As an MOU it is not binding, and if it is an agreement that claims to be more than just an MOU and assumes full legal force, then it contravenes the established Libyan and international norms.