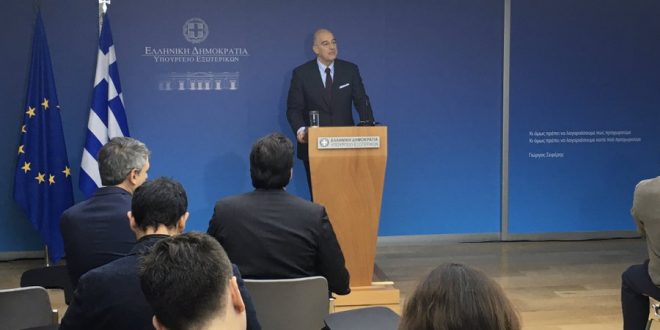 December 6, 2019 Greece Comments Off on Greece expels Libyan Ambassador after he fails to disclose Agreement with Turkey 387 Views

Greece has expelled the Libyan ambassador to Athens and gave him 72 hours to leave the country. “This does not mean we break diplomatic ties with Libya,” Foreign Minister Nikos Dendias said on Friday while announcing the expulsion on live broadcast.

The ambassador was summoned to the Foreign Ministry on Friday morning where Dendias announced him his expulsion.

Last week, the ambassador was given a deadline until Dec 5, to deliver a copy of the controversial Turkey-Libya Agreement on the “maritime borders.” He failed to comply.

The expulsion takes place even though Greece obtained a copy of the deal by neither Turkish nor Libyan sources.

Dendias added that the text of the agreement bears the signature of the Libyan Foreign Minister, “who in September provided assurances to the Greek side in the opposite direction.”

The agreement is “unacceptable” and “raw violation” of the Convention of the Law of the Sea, Dendias stressed

The Agreement was signed by the internationally recognized government of Libya.

Although also Greece has recognized the government, now it is changing direction and sides. It has invited the President of the Libyan House of Representatives to visit the country. The Parliament is under the influence of General Haftar, the head of the  Libyan National Army that fights against the government in Tripolis.