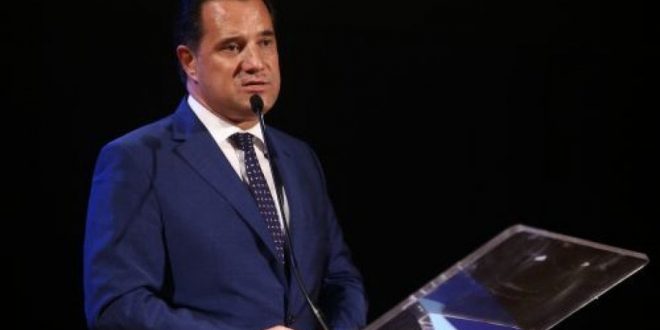 Investment Minister: “We privatize everything,” Greece turns into “hot spot for investors”

December 11, 2019 Economy Comments Off on Investment Minister: “We privatize everything,” Greece turns into “hot spot for investors” 3,774 Views

Development and Investment Minister, Adonis Georgiadis, publicly admitted that the government of New Democracy intends to privatize everything in Greece. Speaking at Capital Link’s 21st Annual Forum on Investing in Greece, the Minister did not leave room for misinterpretation. He assured the audience, US investors, that the government’s sole aim is to privatize everything.

“And I have to reassure you that our appetite is so huge, every month that goes by it gets bigger,” he added.

Georgiadis who was a keynote speaker at the “Invest in Greece” Forum in New York, unfolded his own vision and the government’s policy on the liberal development concept at the most extreme.

“We privatize, you invest,” he said and spoke of “the beginning of a new era for Greece.” He stressed that now is the right time to invest in Greece and called on US investors to hurry up to catch up with the growth momentum and opportunities arising from the country’s new investment policy.

“So my message to American investors is this: now is the time to invest in Greece. Those who have not stopped investing in our country, even in the midst of our worst economic crisis, now it’s time that they reap the fruits. And those who have not invested, now it is time to take advantage of the unique opportunities presented in our country, “he noted.

As the Minister of Development has argued, “the former black sheep of the euro area, the most crisis-hit country that has lost 25% of its productivity in the last decade, is now transforming into a new hot spot for investors and one of the entrepreneurship-friendly economies worldwide.”

PS Once a TV salesman, always a TV salesman… We hope, Minister Georgiadis does not really mean exactly what he said, despite his usual salesman rhetoric. And to not honestly believe that “hot spots” are something to be eager to belong to.