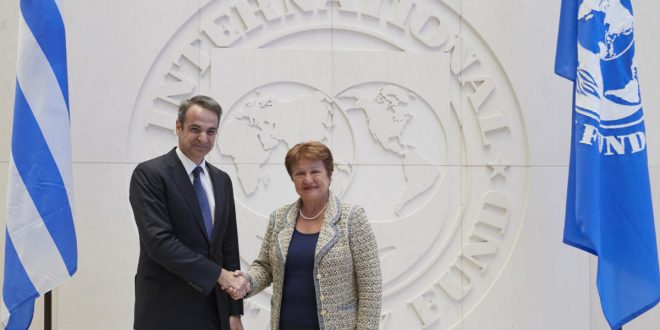 Prime Minister Kyriakos Mitsotakis announced on Tuesday evening that the office of the International Monetary Fund (IMF) in Athens will close. He did not specify when the IMF office will close, though.

Mitsotakis’ announcement followed a meeting with the IMF its managing director, Kristalina Georgieva, in Washington, on Tuesday.

Government sources said the closure of the IMF office signifies “the end of the crisis in the country.”

Speaking with Georgieva, Mitsotakis raised the issue of the primary surplus target that Greece is required to maintain, saying it is time to discuss a lowering of that target for 2021.

“I believe the time has come for this discussion with our partners in the eurozone. We are a credible government, we are implementing reforms, we are in a low interest rate environment, our borrowing costs are lower than those of Italy. There is no reason to be limited by these high primary surpluses,” he said at the meeting.

Mitsotakis said that Greece’s relationship with the IMF was not always easy “but I think that we agree on certain important issues like the need to decrease the primary surpluses for 2021,” he stressed.

The Greek Prime Minister is scheduled to meet with US President Donald Trump at 9 o’ clock (GR time) on Tuesday. No joint statements are planned.

According to Greek media, Mitsotakis is planning to put on the table Turkey’s aggression in the East Mediterranean Sea.

However, it is a rather unfortunate time for the Greek PM to visit Washington, now that Trump is focusing on Iran.

PS Mitsotakis will not get the credit for the closure of the IMF in Athens, would he?