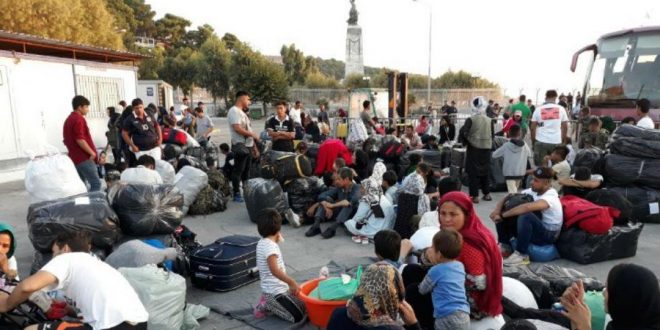 The government’s priority is to reduce migration flows to the Eastern Aegean islands, new Migration and Asylum Minister Notis Mitarakis said on Sunday while visiting islands in the eastern Aegean Sea.

The new Migration Minister visited Samos and Lesvos in order to ease locals’ reactions to the planned closed accommodation centers with capacity higher than the existing numbers of refugees and migrants.

On Samos, Mitarachi paid a visit to the registration center at Vathy and in Samos proper met with local officials to discuss issues.

He said that a key issue was new centers that would decongest the urban areas of the island.

“Today we operate open facilities within towns; we plan controlled facilities beyond the urban network, and this will decongest the islands,” he said after the meeting with Samos local authorities and residents.

On Lesvos, he did not visited the Moria hotspot saying there was no need as the problems it had were known.

Commenting on the upcoming general strike on Jan 22-23 on five island of the eastern Aegean, Mitarakis said  that he understands islanders’ concerns as an islander himself, and the need for decongestion.

“But the most critical issue is to restrict the flows,” he stressed adding that “otherwise, transferring people off the islands to the mainland will be a temporary measure.”

Meanwhile, France has agreed to accept 400 asylum seekers from Greece. Last week, 11 migrants who were rejected asylum were deported to Turkey.

PS No, Migration Minister Mitarakis did not revealed how the migrants and refugees flows will be reduced.