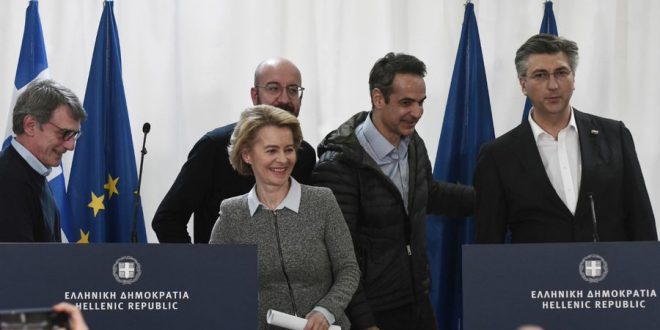 European Commission president Ursula von der Leyen expressed her full support to Greece during visit at the Evros region on Tuesday, where thousands of migrants are waiting to cross into Greece from Turkey.

“Greece’s concerns are Europe’s concerns. As a European, I am on Greece’s side. And on the side of migrants who have been lured with false promises,” von der Leyen said during a joint press conference with the EU colleagues, EUCO president Charles Michel and EP President David Sassoli, and Greek Prime Minister Kyriakos Mitsotakis.

To prove of the honesty of her support she announced that the EC give Greece 700 million euros for the management of the new migration crisis. €350 million will be immediately available, the rest can be requested in the contex of a revised budget,” the EC president said. 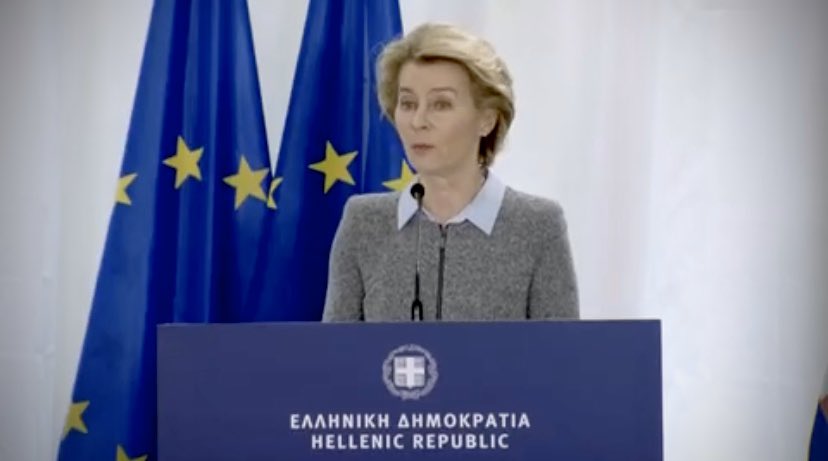 She also announced that the Frontex will be strengthened in Greece with 1 open sea vessel, 6 coast guard vessels, 2 helicopters and 1 aircraft, 2 vehicles with thermo-cameras and 100 border guards who will be deployed at the land and sea borders in addition to 530 already in the country.

“Turkey is not an enemy and people are not the means to achieving a goal. The order at the Greek border would be sustained,” she said among others.

Noting that Greece has activated the Civil Protection mechanism, she said that Greece will receive “medical teams and equipment, tents and blankets.”

Von der Leyen thanked “Greece for being our European shield in these times,” she stressed.

Michel and Sassolli also expressed their full support and solidarity with Greece, in speeches with a strong essence of clichés like “Greek borders are European borders”, “challenge”, “solidarity” and “European values.”

The Greek borders are our European borders.

Our presence sends a strong message.

We trust the Greek government of @PrimeMinisterGR.

Even if the task is very difficult it’s important as Europeans to protect our borders and show respect for international law and human rights. pic.twitter.com/ZMglftFSHv

On the way to Greece with Commission President @vonderleyen and @eucopresident Michel. We visit the Greek-Turkish border together with @PrimeministerGR Mitsotakis to assess the situation. This is a European challenge, we need to respond with solidarity and respect for our values. pic.twitter.com/DH4uaDTtS3

Sassoli said that “had we proceeded with the Dublin reform, we would not face such a problem now.” He added that “Europe needs to pursue a migration policy, to share the burden of migration, to redistribute it equally. But, above all, it needs to haves a unified policy, because otherwise it cannot guarantee the guaranteed values and human rights.”

They had not a single word neither for a sustainable political solution of the problem nor for president Tayyip Erdogan.

Von Der Leyen, Michel and Sassolli arrived at Orestiada airport at 1 o’ clock noon and boarded on a helicopter for a tour over the border region of Evros, including the closed customs office of Kastanies with the thousand of migrants in the buffer zone and on the Turkish side. 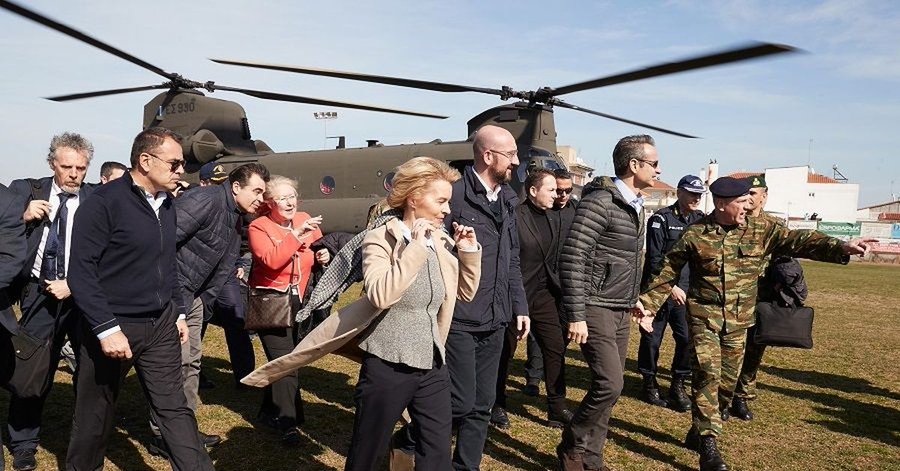 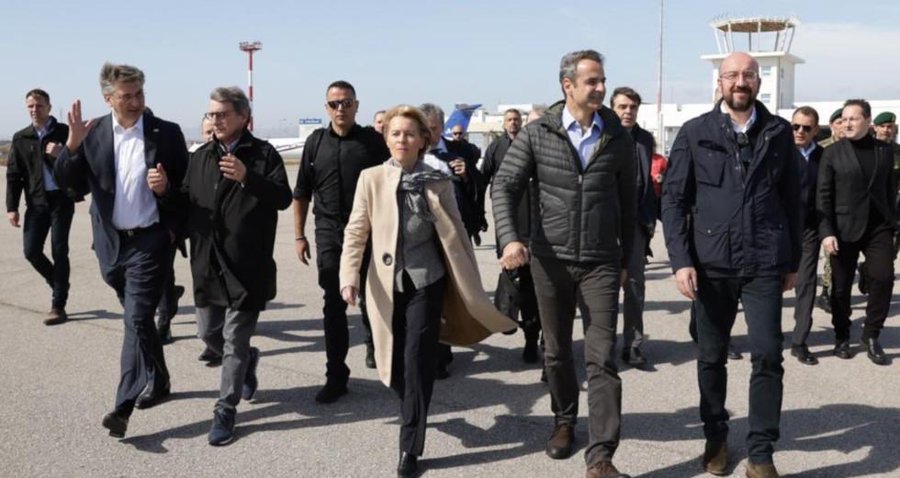 Photo opportunity for the EU leadership in Evros… 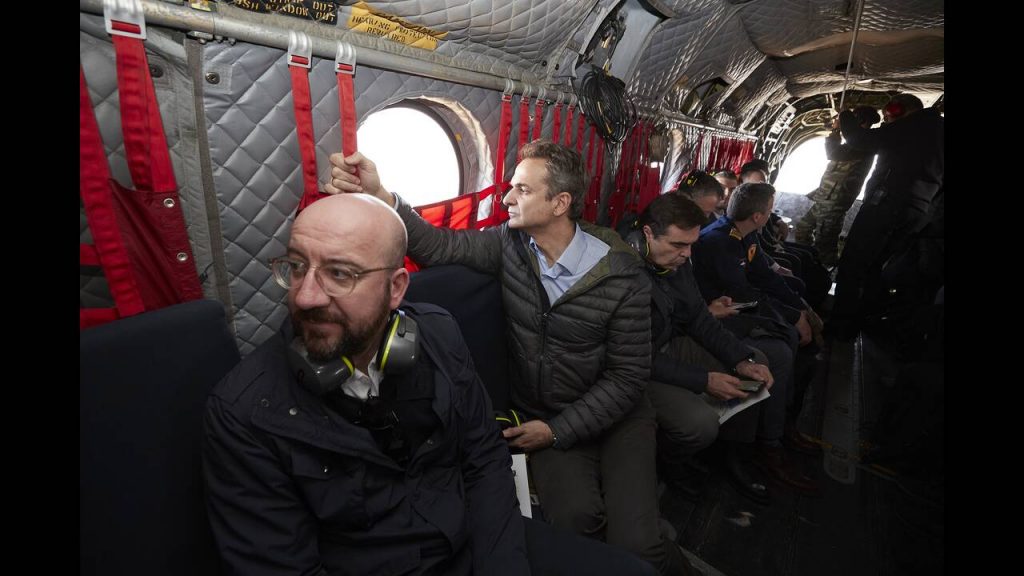 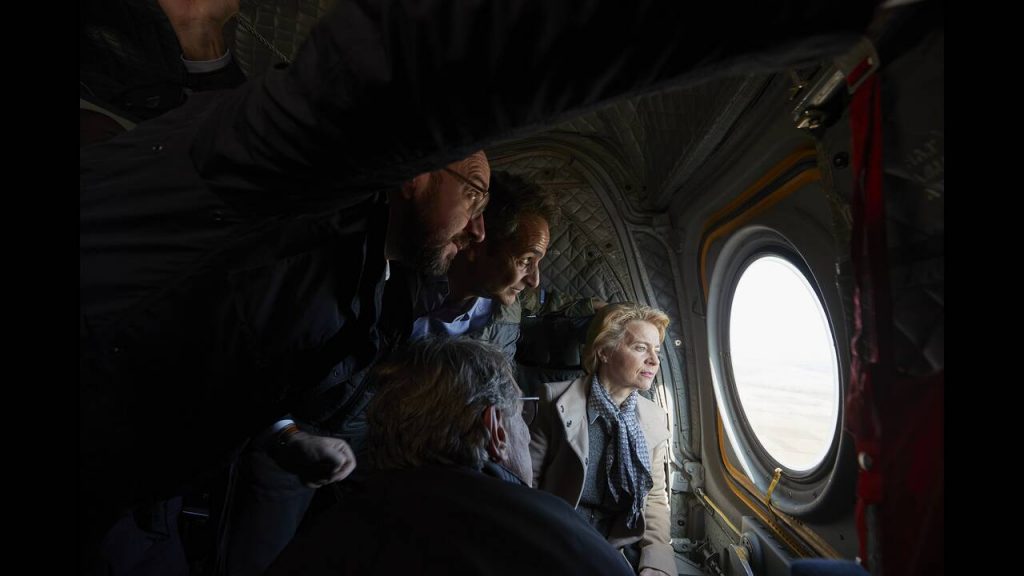 The relaxed but deeply concerned trio company posted their messages on twitter.

Starting my visit to #Greece to assess efforts to protect the border. Flying along the Evros river to inspect the situation on the Greek-Turkish border along with 🇬🇷 PM @kmitsotakis, @EP_President David Sassoli, @eucopresident Charles Michel and 🇭🇷 PM @AndrejPlenkovic. pic.twitter.com/CFboLsSUsr

Visit to Orestiada with @PrimeMinisterGR to witness the situation on the borders of Europe.

We fully support the Greek efforts, protecting borders with respect for international law, human rights and dignity is essential.

The host of Evros touring event, Kyriakos Mitsotakis said stressed that Greece is not facing a refugee/migration problem but an “asymmetric threat.”

“It is my duty to defend Greece’s integrity and this is what I will do. My guideline is the security of Greece and Europe,” he underlined.

“We are acting within the framework of international and European law. Above all, the events at the Greek borders consitute an international political matter of the highest degree,” he stated Mitsotakis. “Greece has shown that it can defend its rights armed with legality and its determination,” he said, adding that the threats of Turkish President Recep Tayyip Erdogan “were not allowed to pass.”

The Greek premier spoke of burden sharing between EU member states, reiterating that “we can’t have countries in the EU pushing the burden of managing external borders onto countries that cannot help lying geographically where they do, and at the same time assume no responsibility in anything related to managing the problem.”

At the end of the day, Greece is to receive just 350 million euros. The Frontex and the civil Protection are independent mechanisms and Greece has already activated them before the three came to Evros.

Yesterday evening Greece asked #Frontex for a second rapid intervention, this time at its external land borders. Today and tomorrow we are holding an extraordinary Management Board to discuss the number of officers and types of equipment we can provide to support Greece pic.twitter.com/xkZL7RyL0G

PS Is the issue between Greece and EU now over? We hope, it’s not. The funding and strengthening the Frontex front are just a provisional support, the migration problem remains unsolved and widely misused by the Turkish president.