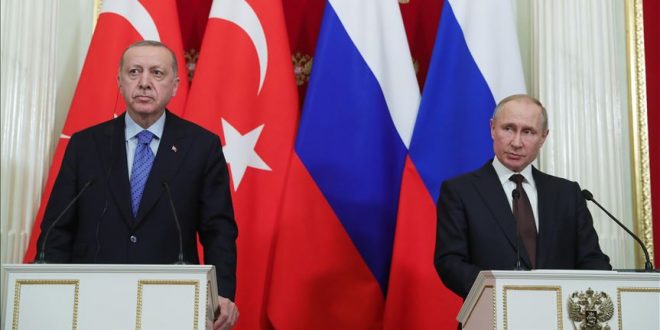 “The Russia-Turkey agreement does not require the rollback of changes made to Turkey’s refugee policy and does not change the fact of the European Union’s non-compliance with its promises as part of the 2016 refugee deal,” they said.

“The EU should take the necessary steps in cooperation with Turkey, and not against Turkey, to end the humanitarian crisis in Syria. The agreement reached today showed that leadership diplomacy is yielding its fruits. Russia has chosen to agree in order not to sacrifice our multi-dimensional relations for the regime’s ambitions and whims.”

The sources said the talks on Syria earlier in the day between Turkish President Recep Tayyip Erdogan and his Russian counterpart Vladimir Putin and their respective delegations were held in a positive environment in Moscow.

The meeting resulted in an agreement on a ceasefire in Idlib.

While noting that Turkey welcomed Putin’s condolences over the martyrdom of Turkish troops in a regime attack last week, the sources said Erdogan made Turkey’s stance clear that if there is no agreement, the country would eliminate regime elements from Idlib through its own means.

Turkey announced the launch of Operation Spring Shield on Sunday after at least 34 Turkish soldiers were martyred in late February in an Assad regime airstrike in Idlib.

“We protected our national interests by preventing a new irregular migrant wave that could come from Syria and we have made the West, especially the United States of America, support us.

“The Turkey-Russia agreement is not an obstacle for the U.S. and EU to support Turkey. Confidence-building steps such as the deployment of air defense systems and intelligence sharing should take place. We should not forget that more than 3 million civilians are still stuck in a small area in Idlib. The risk of irregular migration from the region continues. European countries should not give a chance to Russia to use migrants as weapons against European democracies. What happened in recent days has revealed the need for a comprehensive and deep-rooted solution to the humanitarian crisis in the region,” the sources added.