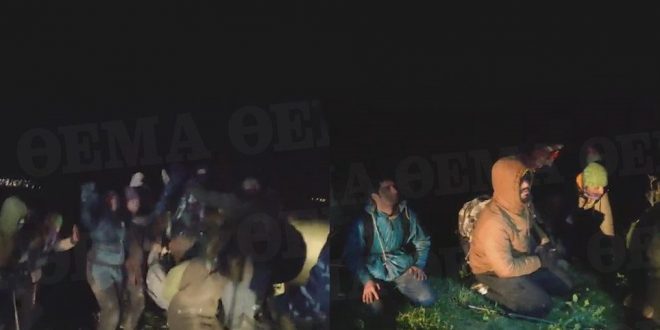 Together with national guards groups of armed vigilantes, locals who have self-proclaimed “border guards” apprehend migrants who have illegally crossed into Greece and hand them over to the Greek Army and police. The vigilantes are farmers and breeders from the area who know very well all the secret passages and the most inaccessible areas of the Evros Delta.

Farmers, breeders and national guards patrol from late at night until early in the morning to track down any migrants trying to enter the country illegally and bring them into the hands of the Greek army and police.

Farmers with tractors and lighted headlights to ttrace movement in the darkness and armed groups of citizens  intervene and scan the area with their 4×4 vehicles.

The video footage was filmed with a mobile phone at 4:20  early morning on March 3.

A small group of men boarding a farm vehicle perceive suspicious movements in the fields, particularly in the area of ​​the southernmost Evros Delta outpost, Egnatia. The outpost is located at one of the entrances to the Evros Delta area, with the river being the natural border between Greece and Turkey.

With their hunting rifles, they patrol the area and night and as soon as they locate migrants  they shout “Hands up!”

“They are many, be careful,” a national guard warns, while one of the vigilantes tell other to call the police immediately.

The scared migrants fall immediately on the ground.

A few minutes later an army vehicle arrives to pick the migrants up and take them to detention centers.

The video was obtained by protothema.