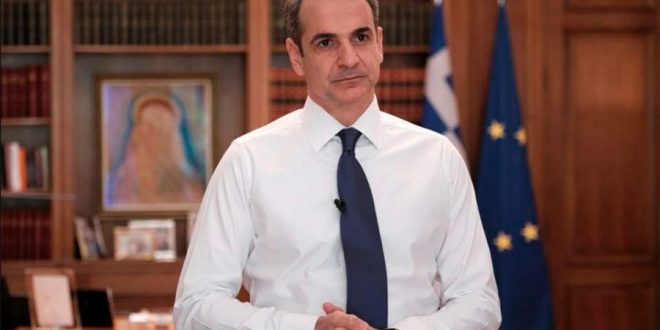 Greek Prime Minister Kyriakos Mitsotakis announced on Thursday evening a support package totaling 10 billion euros and the extension of the 800-euro supplement to more people including recent unemployed and self-employed.

“Tougher measures measures may be needed, there are critical months ahead,” Mitsotakis said in a televised address to the nation.

“In Italy, they do not have enough coffins to bury their dead. Yet we see that some people here are displaying an unjustified level of complacency. That will not be tolerated,” he underlined with a clear message to those disregarding the lockdown measures to contain the spread of conoravirus.

As a result of Greece’s inclusion in a 750-billion-euro emergency asset purchase programme announced by the European Central Bank, Mitsotakis said, the government had a larger cash buffer to distribute to those affected by the coronavirus restrictions.

“The state budget is being adjusted,” the premier said.

“Thus, beyond the measures already on track totalling 3.8 billion euros, there will be an additional disbursement from the state budget of nearly 3 billion euros to support the economy. Another 3 or so billion will be come from the restructuring of the NSRF funding.”

“I am speaking of a total of nearly 10 billion euros, without including forecasts for additional liquidity to be provided to businesses from existing financial tools,” Mitsotakis stressed.

Following up on the recent announcement of an emergency monthly wage of 800 euros to be provided by the end of April to those affected by the market measures, he said, the same amount would be provided to those working in businesses that have seen a downturn in their revenues, to freelancers, and to those who have lost their jobs after March 1.

The premier also appealed to the Greek public to “prevent the dismantling of what we have built recently” by resisting the temptation to take trips away from home in areas that may not be able to provide health services if they get sick.

“The tough times are still ahead,” he said, “and we took drastic measures early on to prevent the spread of the virus, but we do not yet know how effective they will be.”

He added, “The coming weeks will be decisive for our country as well – it’s up to us that tough and complicated (weeks) do not turn into nightmarish ones. I ask you, therefore, that we do not tear down what we have built recently. In Italy they ran out of coffins to bury their dead. And yet in Greece I see some people exhibit an unjustified complacency. I will not accept this.”

The government, he said, has taken all the restrictive measures it can, and he called on the public to restrict unnecessary contacts and to “listen only to official reports.” Fake news are bad for one’s physical and mental health, he reiterated.”This weekend is an opportunity to show our social responsibility: Since we have no professional obligations, we stay home,” Mitsotakis stressed.

The Easter bonus will be paid to employees in the private sector in full by their employers, Prime Minister Kyriakos Mitsotakis said. The exact payout period will be announced by the related ministries, he added. Later media rpeorted that it iwll be given in early June.

“An extraordinary Easter bonus will go this year to our heroes with the green and white blouses: those working in hospitals and the civil protection staff, who work round the clock to keep us all healthy,” Mitsotakis said.

The bonus is currently paid out to private sector employees only. However, this year it will be disbursed to all nurse and medical practitioners at state hospitals and civil protection staff in recognition of their extraordinary services during the coronavirus crisis. [ with info from amna]