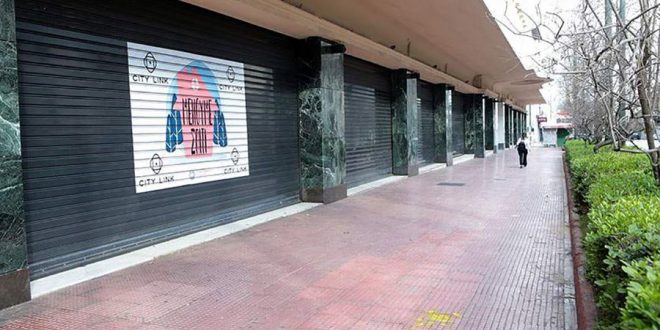 Authorities in Greece have extended the suspension of operation of shops and businesses but also of beaches until April 27, 2020.

According to the decision published in the Official Gazette on Saturday, excluded from the suspension are e-commerce offered by the shut down facilities.

The decision includes also the operation ban of organized beaches and ski resorts, as well as of all sports and fitness facilities and clubs.

Operation of retail stores in shopping malls, “discount villages” etc continues to be banned. Exempted are supermarkets and pharmacies operating in such “shop-in-a-shop” commerce scheme, provided that they have an independent entrance for their customers.

Supermarkets, pharmacies, bakeries, pet shops and other stores remain open as since March 18.

A week earlier, on Saturday, April 4, authorities extended the lockdown measures for the citizens also until April 27.

While everybody in Greece is wondering when the movement restrictions will be lifted, and some government officials hinted the month of May, Finance Minister Christos Staikouras said on Saturday that the extra financial support of 800 euros may be given to workers and business owners also for May and June.

The 800 euros, €400 for one month, have been given to workers and self-employed of businesses that had to be shut down or have been hardly hit by the impact of the coronavirus crisis.

According to the latest data, 93 people have died in the country and 2,011 confirmed cases (stand April 10) have been recorded in Greece since the virus outbreak in late February. However, Greek authorities do not conduct tests for COVID-19 in the general population.