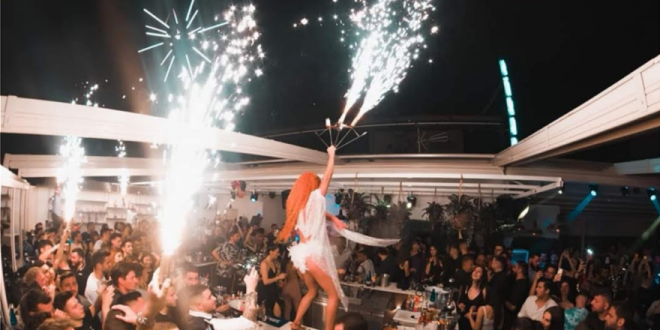 Greek authorities are concerned about Greeks infected with coronavirus who return to the country from abroad, and most important, they break the imposed quarantine and spread the virus to locals. But it’s not only the Greeks from abroad who don’t observe what they should. It is also the local youngsters who crowd in bars and play up, the state mechanism that has relaxed control checks, the politicians ruling the country who do not follow what they preach and the media that hysterically chase crowding phenomena.

Furore broke on Wednesday morning upon the news hat a student infected with the coronavirus had returned from the UK and allegedly organized a party in a luxury villa in Thessaloniki. Some media even reported that “several people have been tested positive for coronavirus infection after attending the party.” According to the family’s lawyer and the student’s father some media even claimed that relatives were “hospitalized in intensive care units.”

The 26-year-old student, daughter of a well-known businessman in the city and a famous Greek singer, had traveled from to Greece by car via Bulgaria.

The news was published by all media, claims and rumors about an alleged quarantine break and a fine of 5,000 euros spread like a wild fire in newspapers websites, news websites, social media and television channels.

The student’s family initially dismissed the reported claims under condition of anonymity. Yet, during the day  some media revealed the student’s name thus breaking her privacy. On Wednesday afternoon,  the family’s lawyer issued a long statement and threatened “gods and demons” – as we say in Greece -, that is the media, for spreading fake news.

The student’s father told a lifestyle website, that his daughter came to Greece after a party with 500 people had taken place in Panorama, Thessaloniki. The father said further that his daughter had only met with four friends in the family’s home.

There are several examples of Greeks returning form abroad who violated the imposed quarantine, contaminated others and set lives at risk.

In Lamia, central Greece, the 30-year-old grandson of a family that recently returned from the USA had violated the quarantine and had visited another town, Atalanti, as well. As authorities try to trace his contacts, the 86-year-old grandfather who also returned from abroad, is intubated in the Intensive Care Unit of a local hospital, his health condition is considered as critical.

Positive were tested also 4 out of 5 members of a family that lives next door to the family that came from the USA. Among the infected is a 2-month-old baby.

Local media report that from the 19 contacts of the young man in Atalanti, one was tested positive. All 19 people have been placed in house isolation. Now authorities are racing to trace the contacts of the latest infection.

According to media, so far, the total number of infections has rose to 9 in Lamia and Atalanti.

Another couple, aged 25 and 26, that returned from Germany to Volos, broke the quarantine and infected a family, among them a pregnant woman and a 2-year-old child.

Now a local prosecutor is reportedly investigates whether the two for “spreading the virus”, the couple may face felony and misdemeanor charges.

Crowding in bars and villas

And yet, it’s not only those arriving from abroad who do not comply with the measures.

Greek media chase phenomena of crowding, and the health authorities run after.

There have been reports of private parties in villas on the island of Mykonos with the owners saying that they just rent the villas, they cannot keep an eye what the tenants do.

The beach bar in Ftelia is still in operation despite the fine and the shut down for 60 days. Why still open? Because the owners appealed the punishment and a final decision is still due. The owners told media that they made a mistake, they could not predict how many people would visit the beach bar. 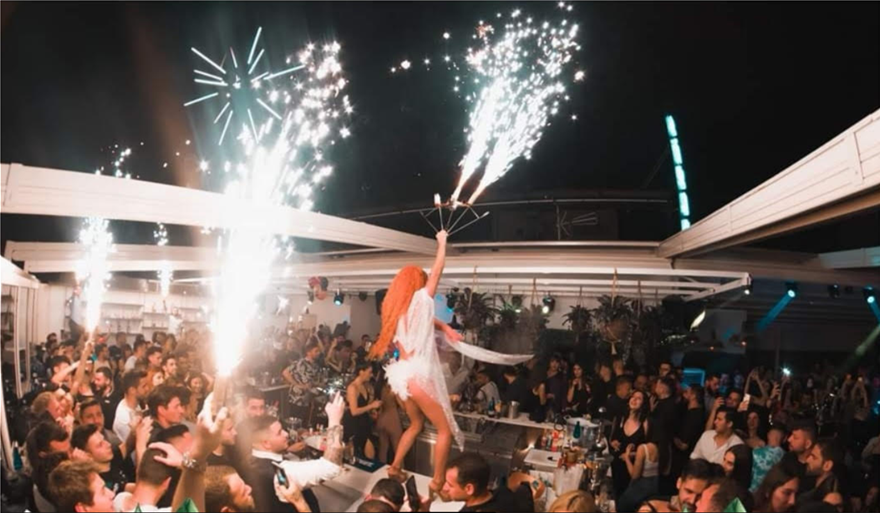 Party in a bar in Gazi, Athens, last weekend.

So what happened suddenly and the “Greeks who showed stunning discipline during the lockdown and complied with the protections measures” are going wild?

The government lifted the restrictions in order to re-start the economy again. This is what happened.

The fines of 150 euros for being out without ID or without exit permit or 20 km away from home disappeared. This is what happened, too.

Nobody checks whether the post-lockdown measure for mandatory use of mask in certain enclosed spaces, elevators etc is observed.

Even in public hospitals with the many security guards, nobody is controlling whether people are crowding in elevators or keep the 40%-capacity as ordered by the law.

State broadcaster ERT TV reported of commuters crowding standing in public transport means because the number of seats to be used have been limited to contain the spread of the virus. As the government do not increase the number of circulating buses etc, it will increase the capacity – currently at 50%.

A passenger arriving from Paris to Athens airport complained to daily efsyn, about unbelievable crowding conditions with dozens of people from two flights to wait for sample testing; standing in spaces without fresh air. (BTW: similar was recently reported from a German airport.)

At the same time, the former disciplined citizens have been watching those who were warning them of the “coronavirus spread” to be the first to break the anti-coronavirus measures and thus without any consequences. Without even an apology to the public.

Even during the lockdown, neither the Prime Minister nor the Mayor of Athens respected the measures.

After the May 4th, when the movement restrictions were lifted, Greek suddenly saw politicians intermingling with the crowd, in relaxed mood and without masks or keeping any safety distance or press against each other for a photo opportunity..

As of next Monday, June 15, tourists from 29 countries will be allowed to come into the country without testing and quarantine.

So, why should Greeks, especially the young ones, bother?