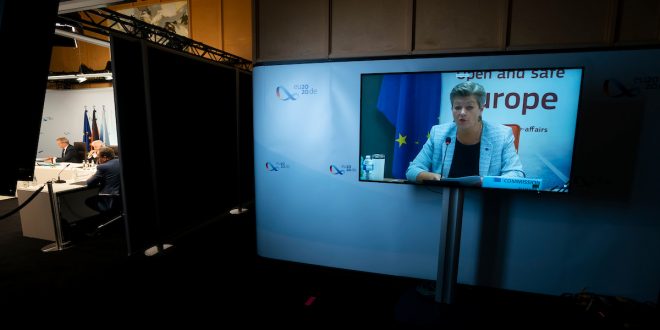 Three Greek ministers were grilled with a storm of questions at the European Palriament on Monday regarding pushbacks of illegal migrants at the land and the sea borders and cases of probable lethal shootings at the Evros border with Turkey.
Minister for Citizen Protection Michalis Chrysochoidis, Migration Minister Notis Mitarakis, and deputy Migration Minister Giorgos Koumoutsakos stood question and answer to members of the Committee on Civil Liberties,  Justice and Home Affairs of the European Parliament.
Reason for the session were reports by by some Greek and German media about pushbacks and the Greek government policy at the borders, a video by the Forensic Architecture research team on the murder of the 22-year-old Syrian refugee in Evros as well as complaints received by the Commission from human rights organizations such as Human Rights Watch and Amnesty International.
The Ministers insisted that these reports were “fake news” and repeated generalities that Greece “respects human rights, human life and international law.”
“Greece guards the European borders in an effective way” said Chrysochoidis, and Mitarakis added that the government “places special emphasis on the protection of human life.”

“We must not rule out that we will again have to repatriate illegal immigrants and we all must be ready to prevent such entry attempts,” Koumoutsakos said emphasized that “the role of the European shield, which the government has willingly accepted implies a specific policy at the borders.”

Chrysochoidis said also that “no weapons were used, only police measures were used”, and cited the fact that there were hundreds of TV crew cameras and eyewitnesses. “If there is a complaint, send it to be investigated,” he said.

“They are off topic, as if they have been invited to a wedding and they deliver eulogies,”  chairman of the Committee and MEP Juan Fernando Lopez Aguilar commented ironically.

Some critics went even so far to accuse Greece of “far-right policies” at the borders.

Frontex chief executive Fabrice Leggeri admitted that in a quick operation at the sea border, the Greek Coast Guard ordered a Danish boat not to board migrants and repatriate them to Turkey. He said that he immediately asked for explanations from Greece. The response he received was that “there was a misunderstanding, someone did not understand the order well!”

“There are reports of deportations of immigrants, which are explicitly prohibited. Pushbacks are illegal and I call on the Greek authorities to investigate them all,” Johansson said in a statement.

“It is responsibility of authorities to monitor the situation…reports have to be investigated & [ Greece] is obliged to follow up…but we also need new proposals to make sure member states monitor the borders the right way,” she said.

There have been several reports of pushbacks by national and international media. The death of the Syrian migrant was investigated and published on Der Spiegel. However, the investigation left some questions open and spoke that the death was “probable” caused by the shooting.

PS Either … or…, Greek authorities should indeed investigate the issues and stop playing the offended, as they rather fall into the Turkish trap that uses such incidents to launch the usual propaganda against Greece.

The European Commission says it may now propose a new system to monitor illegal pushbacks of migrants – amid mounting evidence of abuse by both Croatia and Greece.

“It is time to consider if we also need to put in place a new mechanism to monitor and verify reports of pushbacks,” she said.

No specifics were given – via eurobserver