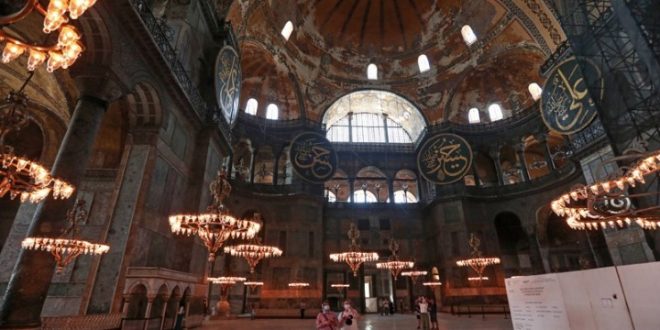 Greece has strongly condemned Turkey’s decision to turn the World Heritage monument of Hagia Sophia into a mosque. The political leadership of the country issued strong wording statements on the issue, as Athens is exploring sanctions against Turkey and is launching initiatives on international level.

“Turkey’s decision to turn Hagia Sophiat into a mosque directly challenges our historical memory, irreparably undermines the values ​​of tolerance and dialogue of religions and causes a serious blow to its relations with Greece, the European Union and the international community.

Hagia Sophia, a monument with an ecumenical character, belongs to humanity and the world cultural heritage. It’s a symbol of Orthodoxy and the whole of Christendom.”

“This decision – coming 85 years after it was declared a museum – is an insult to its ecumenical character. It also constitutes a choice that similarly insults all those who recognize the monument as part of world culture.

The decision affects not only Turkey’s relations with Greece, but those with the European Union, UNESCO, and the global community as a whole.

It is regrettable that the Turkish leadership, which in 2005 worked for the Alliance of Cultures, now chooses to move in the entirely opposite direction.”

The Turkish court’s decision is “a blatant provocation to the entire civilized world, a world that recognizes the unique value and universality of this monument.

The nationalism exhibited by President Erdogan is not his best adviser, and is driving his country back six centuries.

Just because a Turkish court succumbed, it does not mean that Hagia Sophia will lose its prestige and its universal message. President Erdogan has decided to culturally isolate Turkey.”

“The court decision announced by the Turkish president is a provocation to the global cultural heritage and to UNESCO, which has recognized the monument as such.”

Nikos Dendias briefed fellow ministers in the European People’s Party (EPP) group on Friday of the issue. He was attending a teleconference of EPP meeting ahead of the EU’s Council of Foreign Ministers on Monday.

Government spokesman Stelios Petsas said on Saturday morning, the Greece plans to impose some sanctions to Turkey. He did not elaborate.

Speaking to Skai TV, Petsas said “Erdogan’s decision was a historical mistake” and added that Hagia Sophia is an “international issue.”

“There is no doubt that that we will proceed with some kind of sanctions,” he said.

He stressed that “Greece will do everything possible so that there will be consequences for Turkey,” not only from the European Union but also by international organizations like the UNESCO.

Turkey’s decision was condemned also by the Greek opposition parties and the government in Cyprus.

President Recep Tayyip Erdogan signed the decree to turn the iconic Byzantine Basillica into a mosque in less than an hour after the decision of the Council of State that announced the 1934 decree.