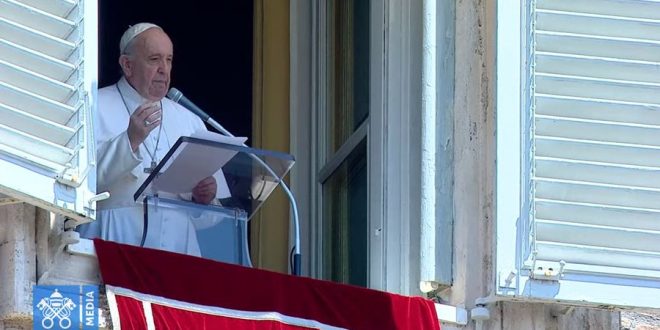 Pope Francis says he is “deeply pained” over Hagia Sophia

Pope Francis said on Sunday that he is “deeply pained” over the decision by Turkey to change the status of Hagia Sophia into a mosque. “My thoughts are in Istanbul, I’m thinking of Hagia Sophia and I’m deeply
pained,” the Pontifex said on Sunday, during his weekly blessing in St Peter’s Square.

It is he first reaction of Vatican and the Catholic Church on the issue.

In improvised remarks after reciting the Angelus, the pope recalled that July 12 is Sea Sunday, when the worldwide Church prays for seafarers.

“And the sea carries me a little farther away in my thoughts: to Istanbul. I think of Hagia Sophia, and I am very saddened,” he said, according to an unofficial translation reportedly provided by the Holy See Press Office.

Following Friday's decision by the Turkish government to turn the former Greek Orthodox Cathedral and Basilica of Hagia Sophia in Istanbul into a mosque, Pope Francis at Angelus today:
"I think about Hagia Sophia, and I am greatly saddened." pic.twitter.com/M2ZNal3YCF

Pope Francis is the latest religious leader to condemn the move. The pope’s comments followed the publication of articles in the Orthodox Christian media asking why the Vatican had not commented on the decision of Friday.

The World Council of Churches has called on Erdogan to reverse his decision and Greek Orthodox Ecumenical Patriarch Bartholomew, the Istanbul-based spiritual leader of the world’s Orthodox Christians, called it “disappointing.”

President Erdogan signed the decree to convert the Hagia Sophia from museum to a mosque less than an hour after Turkey’s Council of State ruled that the decision of 1934 to turn the mosque into museum was unlawful.

Ecumenical Patriarch Bartholomew of Constantinople, the spiritual leader of Eastern Orthodox Christians, has said that the building’s prior status as a museum made it “the symbolic place of encounter, dialogue, solidarity and mutual understanding between Christianity and Islam.”

Turkish President Tayyip Erdogan has said the first prayers would be held in Hagia Sophia on July 24, after declaring the ancient monument was once again a mosque following a court ruling revoking its status as a museum.

Erdogan said the nearly 1,500-year-old Hagia Sophia, which was once a Christian cathedral, would remain open to Muslims, Christians and foreigners.

Greece has condemned the move and UNESCO said its World Heritage Committee would review Hagia Sophia’s status and that Turkey’s decision raised questions about the impact on its universal value as a site of importance transcending borders and generations.