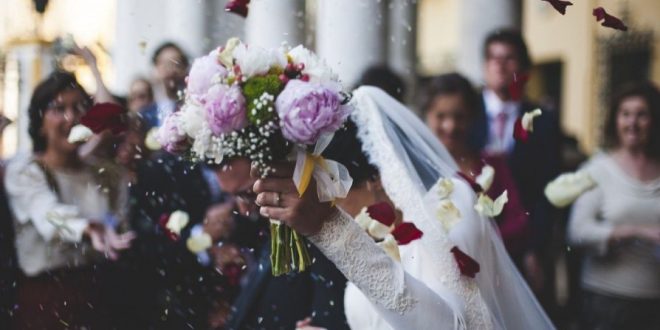 The Coronavirus was the uninvited guest at wedding party in Thessaloniki a week ago. The virus danced and hugged and probably also exchanged kissed with newly married and the guests and sent twelve people to hospital, among them the groom.

A party with 150 guests took place in Ampelokipoi suburb of western Thessaloniki last Saturday. On the following Tuesday, several people developed fever, among them the 35-year-old groom. By Wednesday, the first of the guests was diagnosed with Covid-19.

According to a post on social media by the hospital workers, the first to arrive at the Emergency of Papanikolaou Hospital on Tuesday was the groom. Short time later, two wedding guests sought medical help.

On Thursday, another 10 wedding guests sought the hospital with fever and other coronavirus suspicious symptoms.

At least three of them were initially tested positive.

The president of the employees of Papageorgiou hospital, Panagiotis Touchtidis, stated that on Thursday night, 12 people from the wedding went to the hospital emergency room, some of them with high fever and suspicious coronavirus symptoms.

The groom and and two other female guests remained in the hospital and are expected to be discharged by tomorrow, Saturday.

The other patients who had mild symptoms were reportedly allowed to return home and remain in self-isolation.

The incident set health authorities in the city on high alert as Thessaloniki is one of the urban centers with increasing infections, next to Athens.

Authorities launched tracking of the patients’ contacts and are concerned about a possible increase of infections.

There are currently a total of 9 COVID-19 patients in the coronavirus section of Papanikolaou Hospital, but none of them is being treated in Intensive Care Unit.

According to latest information by among the infected are also the bride, the groom, the groom’s mother, sister, father and his wife as well as the party DJ.

Voria.gr reports that there were over 300 people at the party, some of them from Germany. The party was supposed to be held outdoors of the wedding facility, however, the guests moved indoors due to a light rainfall.

The results of more Covid-19 tests conducted in private laboratories are expected.

Greece has been experiencing an increase of infections in the month of July, partly due to opening its gates to arrivals form other countries and partly because many of the local population do not observe social distancing and other measures.

On July 29, the government re-introduced the mandatory use of mask in majority of enclosed spaces and does not exclude to impose additional restrictions to contain the spread of the coronavirus.

However, it has reiterated several times that a total lockdown like in spring was out of question.