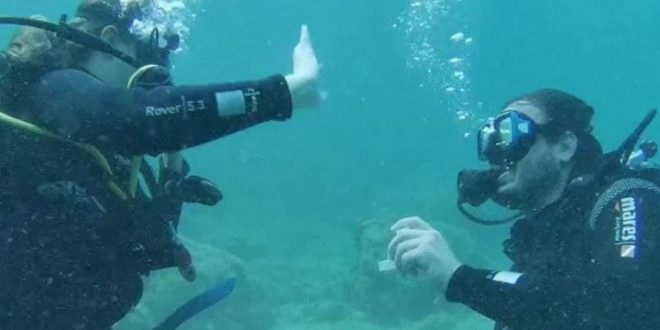 A groom kneeing on hard ground in front of his loved one, holding a ring and asking her to marry him? Boooooring! An original proposal took place in the biggest Natural Sea Park off Alonissos: underwater.

Wearing diving gear, Vangelis and Aphrodite dived in a depth of 3 meters accompanied by the chairwoman of the Tourism Committee of the island Maria Agallou.

Holding the traditional small box with the ring, Vangelis proposed and bride to be Aphrodite said … or rather nicked “Yes, I do.”

The underwater marriage proposal was made with the consent of the mayor of the island, the event was organzied in cooperation with Triton Diving Center..