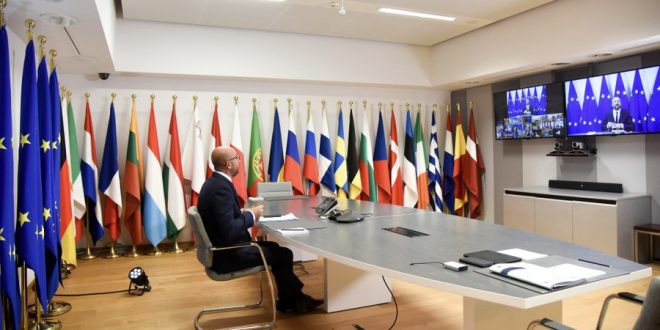 Greece managed to draw the attention of its European partners to the tense situation in the East Mediterranean Sea  and Turkey’s aggressiveness and to press them to take position on Turkey. After the extraordinary teleconference of the European Council focusing on the situation in Belarus on Wednesday, Greek Prime Minister Kyriakos Mitsotakis said that Europe cannot adopt different standards for Belarus than it does for Turkey.

The EU’s approach to human rights and the state of law must not be different for Belarus compared to that for Turkey, the Premier said.

Mitsotakis made reference to the latest developments in the Eastern Mediterranean, the Greek-Egyptian agreement on maritime zones, which is “absolutely legal and a model agreement,” – as he stressed – while Turkey “systematically violates all rules of the International Law.”

He said that Turkey’s behavior with its illegal NAVTEX  including surveys in the Greek continental shelf pose a threat also to European security.

Greece has never turned down negotiations with Turkey, “but not as long as there is tension at sea, at land and in the air – and for our only difference, which is the delineation of the maritime zones,” Mitsotakis underlined.

The European Council’s president and the leaders of Germany and Austria reiterated the European Union’s support of Greece and Cyprus in the rising escalation by Turkey in the Eastern Mediterranean.

German Chancellor Angela Merkel conveyed the concern of the European Council over the tension in the Eastern Mediterranean and its support of Greece and Cyprus. Note that Germany is holding the rotating presidency in the EU and has undertaken a mediating role promoting the dialogue between Greece and Turkey.

“Every possible effort must be made to de-escalate the dangerous tension in the region,” Merkel said adding that the Council expressed solidarity to Greece and Cyprus in terms of their rights.

Germany, she underlined, supports the restart of dialogue on disagreements concerning the delineation of maritime borders between the two countries, a dialogue that continued until 2016.

“From our point of view, it must restart, especially between Greece and Turkey,” she said, but expressed concern over the escalation and said “we shall return to the issue in depth in September.”

Austrian Chancellor Sebastian Kurz said that the European Union is fully supportive of Greece and Cyprus and called on the EU for a clear reaction to Turkey’s aggressive behavior.

“Europe cannot look away from these obvious violations of International Law,” Kurz said. It is not enough for the EU to say things without acting upon them, but it must “strongly condemn Turkey’s actions and take specific measures against it,” he noted.

In a statement issued after the teleconference Council President Charles Michel said, “The situation in the Eastern Mediterranean and the relations with Turkey were raised by some member states. We are increasingly concerned about the growing tensions and stressed the urgent need to de-escalate. We expressed our full solidarity with Greece and Cyprus and recalled and reaffirmed our previous conclusions on the illegal drilling activities. We agreed to revert to these issues during our meeting in September. All options will be on the table.”

Greece is pushing for sanctions against Turkey.

Prior to the meeting with Merkel later today, French President Emmanuel Macron described the current Turkish regime as “a mixture of Islamism and Nationalism that follows a policy aiming to destabilize the whole Mediterranean Sea.

“Europe must take the necessary measures to hold this particular policy of Erdogan,” Macron said  and added that “Europe must see the facts and assume its responsibilities. We sent the message that European solidarity has a meaning.”

Europe’s Foreign Affairs ministers will hold an informal meeting on August 27, and the European Council will hold an extraordinary session on its relations with Turkey on September 24 and 25.

Of course, not all of EU member states side with Greece and Cyprus against Turkey, but Greece has the time to build alliances.