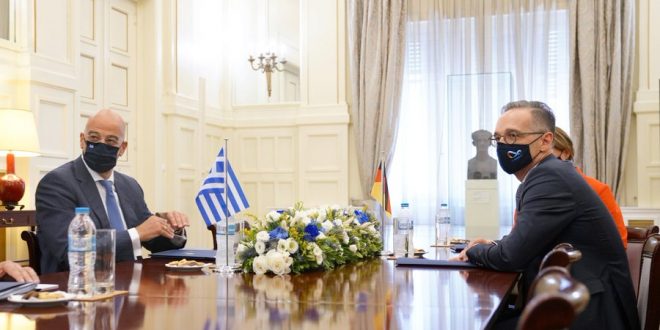 Panting, disinterested Germany struggles to mediate between Greece and Turkey

German Foreign Minister Heiko Maas warned that “the slightest spark in the Eastern Mediterranean Sea region could cause a disaster” and called for “an immediate end to all provocations in the area.” We suppose that Maas was addressing Turkey without mentioning it by name, and not Greece, while he was in Athens on Tuesday. He maybe even confused Athens and Ankara, which he will visit later on the same day afternoon.

The mantra of German Foreign Minister was “dialogue, dialogue, dialogue,” however, Maas did not elaborate -at least in public statements – on Berlin’s concept of dialogue between the two neighboring countries that have their fleets at standoff in the East Mediterranean Sea. He assured, though, that “Germany will support, with all its strength, the dialogue process always on the basis of international law.”

“Supporting with all its strength the dialogue”: That’s good. And nice. And it shows the same devotion as a boy-scout’s oath. Or Germany’s top diplomacy has nothing but just cliches for the sake of a quotation worth to be mentioned by the media. Not even.

“The windows of dialogue between Greece and Turkey should now be opened more, not closed. To achieve this, we need, instead of new challenges, finally de-escalation steps and the start of direct talks.” Maas said as panting Germany struggles to mediate between the two neighboring countries, hoping that they will somehow sit at the dialogue table no matter what form it has. Certain is that Greece will bring the issue of the continental shelf only and Turkey a thick book of demands and claims. Is Germany aware of these windows?

“In the EU Council of Foreign Ministers this week we will discuss our relationship with Turkey. The opinion of Greece will be of particular importance. And that’s why it’s important for me to look for direct conversation on the ground once again.”

OK. We take note. We’ll double check towards the end of the week.

Greece was possible expecting a stronger wording from the German Foreign Minister that did not and could not come.

“The obsession with delinquency leads nowhere,” Foreign Minister Nikos Dendias said after the meeting with Maas and made clear to Germany that dialogue under threats and blackmails is not possible.

“”Many of us recommend dialogue. But there can be no dialogue under the regime of threats,” Dendias underlined.

Referring to Turkey, Dendias stressed that instead of de-escalation moves, there are new provocations, while noting that these behaviors and moves undermine stability in the region and constitute a violation of international law.

The Greek Foreign Minister also noted that the situation in the Eastern Mediterranean concerns the entire European Union and stressed that the EU acquis needs to be strongly defended against regressive forces.

Dendias called for sanctions to be imposed on Turkey at the forthcoming Informal Council of Foreign Ministers on August 27-28.

Maas’s meeting with Prime Minister Kyriakos Mitsotakis does not seem to have been particularly successful either.

Government sources told state-run news agency amna,, Germany which holds the Presidency of the Council of the European Union has a positive contribution in the direction of “need for de-escalation of the Turkish provocation in order to reduce tension in the region.”

It looks like a very awkward moment in the life of German diplomacy that appears to be torn between its obligation to support EU member state Greece and its historic support to its favorite child Turkey.

Germany looks weak, spineless and most important disinterested in the issue; as if it has to perform a boring errant but inevitable duty while it is burdened with the rotating EU presidency.

It is not clear what Germany aims to achieve by mediating between the two countries? “A dialogue is a dialogue is a dialogue…” Gertrud Stein would say paraphrasing “a rose is a rose is a rose.” Will it be satisfied with a photo opportunity with representatives of Berlin, Athens and Ankara shaking hands in front of the negotiation table? And then breath relieved when the EU Presidency time is over?

Berlin does not favor sanctions against Turkey and it was quick to express displeasure over the maritime boundaries agreement between Greece and Egypt.

Interesting enough, we did not hear any loud protest from Berlin over the Turkish-Libyan illegal agreement.