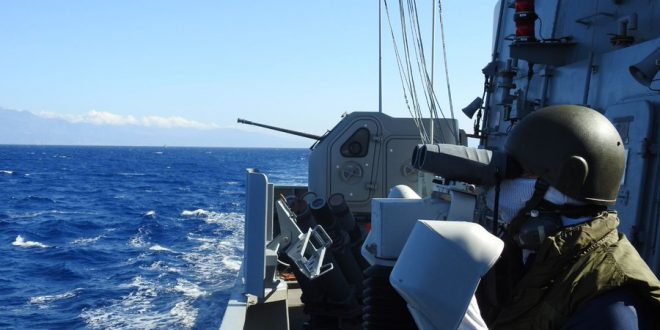 Turkey demands demilitarization of Chios with a …NAVTEX!

Turkey doeσ not show any sign of intention to de-escalate tensions with Greece and in an unprecedented move it issued a navigation warning, a NAVTEX, demanding the demilitarization of the island of Chios. In its urgent maritime safety information to ships, Ankara goes so far to to invoke the Treaty of Lauzanne of 1923.

The NAVTEX, issued by the station of Izmir, demands “legality,” and invokes the Treaty of Lausanne for the militarized zones in the Aegean Sea, claiming that it is “violated.”

With public statements, President Recep Tayyip Erdogan has often challenged the Treaty of Lausanne pushing for its review. Note that the Treaty has defined the borders of modern Turkey after the collapse of the Ottoman Empire and it was not an issue merely between Greece and Turkey. It settled also conflicts with France, the United Kingdom, Italy, Japan, Romania and Yugoslavia.

After its provocations in the Greek continental shelf with Oruc Reis, the island of Kastellorizo ​​and the Eastern Mediterranean, Ankara is now focusing on one of its other demands, the demilitarization of the islands, putting its onset on Chios.

Turkish Minister of Defense, Hulusi Akar, had openly raised the issue of demilitarization of the Greek islands.

The Turkish NAVTEX is a counter-NAVTEX to the one issued by Greece that announced  exercise of the Land Forces in the sea of Chios with live ammunition.

Note that the island of Chios is of highest strategic importance as it is located 10 nautical miles from the Turkish port of Cesme.

Turkey maintains its so-called “Aegean Army” or  the “Fourth Army”, one of its four main formations, along the entire west coast. The 4th Army has its headquarters in İzmir, some 80 km in the north of Cesme.