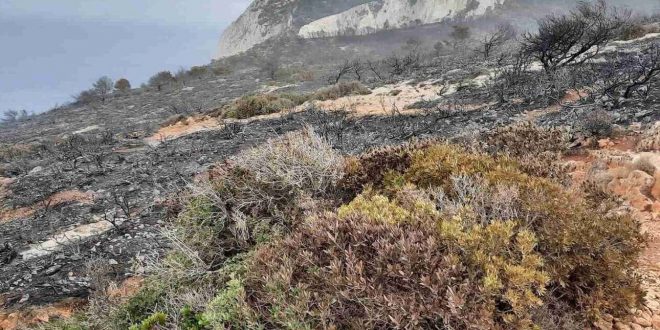 Firefighters struggled all night to bring the wildfire in Volimes, Zakynthos under control. The fire broke out on Sunday afternoon near the village Volimes on Zakynthos and burned a pine forest over the popular beach of the famous shipwreck Navagio.

The firefighters set the blaze under control at very adverse weather condition with winds blowing up to 8 Beaufort.

The vegetation above the beach of “Navagio” was burned.

According to local media, strong forces of the Fire Brigade are still operating in the area in order to bring the fire under full control, but also to deal immediately in case there is re-flamming.

A grader opened a way along the forest in the dark in order for the firemen to reach the blaze.

At some point, the village of Volimes was at risk and there were thoughts to evacuate the area. However, the danger was averted.

Assistance from the air came with the first morning light, when three firefighting aircraft and two helicopters joined the firefighting forces of over 70 people.