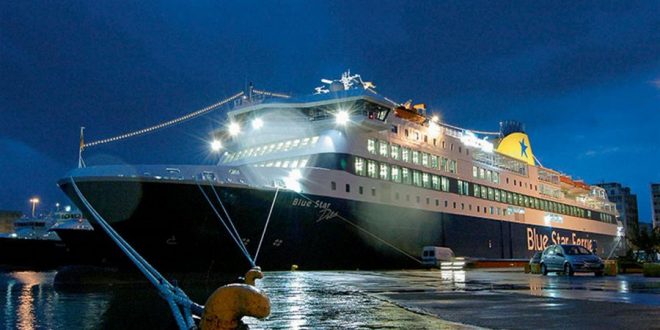 Passenger ferry “Blue Star Delos” changed its route and returned to the port of Piraeus when a French national was confirmed positive to Covid-19. The woman was accompanying 24 French students to a trip on the island of Santorini.

A sample from the French national had been taken upon her arrival at “Eleftherios Venizelos” airport in the context of random testing. The group did not wait for the test results and continued its trip that had Santorini as destination.

The group embarked to Blue Star Delos. The ferry had almost reached the island when health authorities informed the French teacher about the test results.

Immediately instructions were given for the return of the group to Piraeus as there is no quarantine hotel on Santorini, cnngreece reported.

Passenger vessel changes route due to positive test result on board
The Blue Star Delos was en route to Santorini when she changed her destination to reach Piraeus as one passenger was confirmed positive in COVID-19 yesterday, media say.
Look at her past track here: pic.twitter.com/eJylMsMekM

Apart from the group, a total of 485 passengers were on board of Blue Star Delos plus the crew.

Health teams were waiting for the passengers at the port of Piraeus, where the ferry docked late on Monday night.

During the night, spaces on the ferry were disinfected and contacts tracking took place.

According to the instructions of National Public Health Organisation (EODY), the French woman, the students and other teachers were transported to a quarantine hotel.

According to state broadcaster ERT, the group is to undergo rapid tests on Tuesday.

The ferry’s schedule is Piraeus-Santorini-Naxos-Paros.