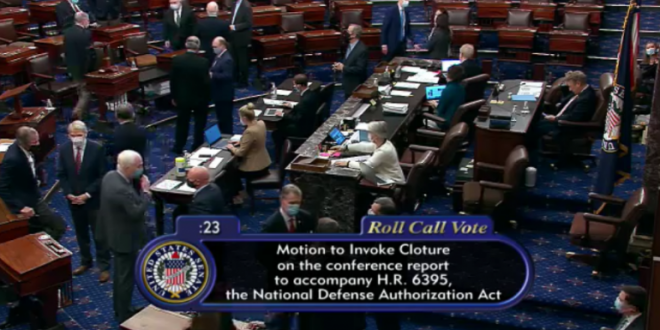 US Congress approves bill that sanctions Turkey over Russian S-400

U.S. Senate approved on Friday with 84-13 votes the 2021 NDAA bill that imposes mandatory sanctions on Turkey for its acquisition of the Russian S-400 air missile defense system as required under existing U.S. law, the Countering America’s Adversaries Through Sanctions Act (CAATSA).

The bill also strengthens U.S.-Greece defense cooperation with an authorization to appropriate $50.18 million for military construction at Souda Bay, Crete, in addition to requiring a feasibility study of increased rotational deployments to Greece.

On Tuesday the House of Representatives voted in favor of NDAA with votes 335-78. President Trump has 10 days to veto the bill, otherwise it automatically becomes law.

The annual defense bill is under a veto threat from President Donald Trump. However, the bill passed each chamber of Congress by a veto-proof margin.

“We commend Congress for holding Turkey accountable for its blatant violation of U.S. law by calling for the imposition of sanctions on Turkey no later than 30 days after the bill’s enactment, and separately, for strengthening defense cooperation between longtime NATO allies, United States and Greece,” Supreme President George G. Horiates said. “This bill is a policy victory for the community, and we applaud all groups and individuals for their advocacy and reaching out to their legislators. We call on President Trump to sign it into law.”

He added, “We thank the bipartisan and bicameral lead of legislators such as Senator Robert Menendez and Representatives Adam Kinzinger and Abigail Spanberger, who sponsored or secured the provision to impose sanctions on Turkey; and Congressman Gus Bilirakis, who sponsored the amendment for a feasibility study of increased rotational deployments to Greece.” source: greeknewsonline

What do you think? Take the Poll, please