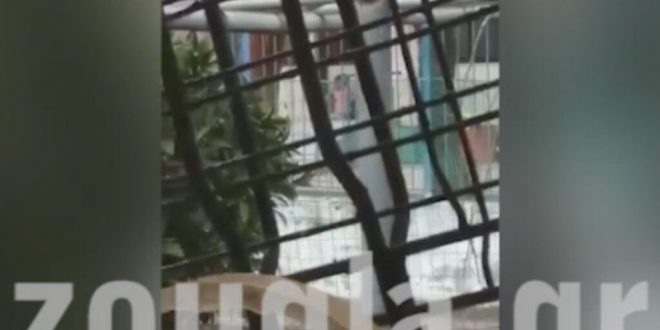 A little girl is standing in the cold at the door of the kindergarten class and screams. She begs her teacher to let her inside, she shouts for her mum. She is just 4 years old. She wears just a pink dress, no coat or anorak in a freezing day. The teacher at the kindergarten in Halkida had set her in the courtyard for “punishment” because she was ..naughty. As the girl keeps screaming, the other children in the classroom are terrified. Some tell later their parents that “they closed their ears with their hands” because they could not hear their classmate screaming. A horror scene in Greece of 2021.

A passerby, a mother who also has her child in the same kindergarten. hears the screams. The takes her mobile and films the heartbreaking and inhumane scene.

The incident took place last Tuesday, Jan 26, when a icy cold front was sweeping throughout the country.

The mother goes inside and demands explanations. The teacher claims that the 4-year-old was naughty, had a seizure and was out of control, had attacked the other children, kicked the teacher and out the face mask inside her mouth.

Apparently, the child informed her parents about the brutal punishment, the teacher apologized.

However, the parents of other children at 1st Agios Mikolaos kindergarten in Halkida were not satisfied with the way the incident was closed and “buried.” They demanded explanations by the education authorities.

Ultimately, the video is then sent to news website zougla.gr by another mother who denounces also other violent incidents towards her own 4-year-old son by different kindergarten teachers.

Aphrodite Panagakou told zougla.gr that the latest one took place this week: her son came home with a “hand pressure mark on his neck.”

Panagakou is considering to file a report to the Education authorities saying that such brutal behavior on the side of the kindergarten teachers must be investigated.

Until the highly concerned mother files her report, the Education Ministry ordered internal investigation on the incident with the little girl on Saturday after the video was also broadcast by Ant1 TV on prime time news on Friday.

Speaking to zougla.gr website, the teacher who “punished” the little girl by setting it in the cold courtyard admitted the incidedent, described that the child was out of control and said that “I set it out of the door and kept talking to her to calm her down. Right away I called her mother.”

She admitted “certainly my behavior was extreme, but I had to protect the other children.”

She added that she toalked with the girl’s parents about “the next steps to improve the child.”

Regarding the mother who shot the footage, the teacher said “she may have revenge behavior” against her.

Meanwhile, other kindergarten teachers told zougla that this was an issue of “special sensitivity.” They said that the root of the problem lays in the fact that there is no support whatsoever to teachers who may be confronted with behavior problems of children.

There should be a separate room to isolate a child with behavior problems at the time of an incident or the help by a second kindergarten teachers.