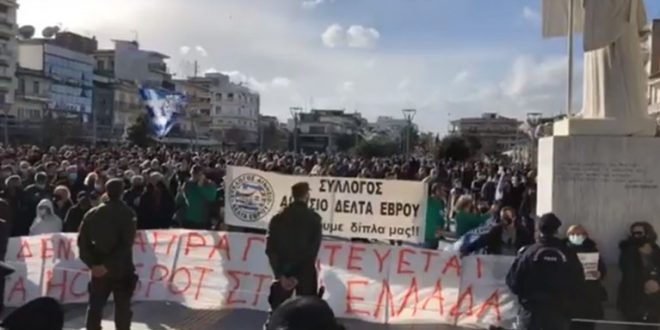 They were holding Greek flags, many did not wear masks and at some point they sang the National Anthem..

Indicative of the hostile mood is the comment by the local reporter on the footage, who named Minister Mitarakis “the nightmare of Evros and of whole Greece.”

Hundreds had gathered outside the Town Hall, and the minister had to be evacuated while bottles and eggs were thrown at his car.

The furious protest followed suggestions of a new migrants camp in the area. A local official said that the Minister had told him that he could bring 10,000 migrants and refugees in the area, local media reported.

The minister was jeered also in Alexandroupolis on Tuesday when he visited the Prefecture.

The government has no plans for new migrant hosting facilities in Evros, Minister Mitarakis said after a meeting with the Deputy Regional Governor of Evros Dimitris Petrovic

“It is clear that the national strategy for Evros, which is for ‘no new facility and no permanent residence of refugees and migrants in Thrace’ has not changed and will never change,” Mitarakis stressed

It should be recalled that the New Democracy government fed nationalist sentiment in the area last week and even used locals in its efforts to halt migration influx. It turned a blind eye to locals patrolling at the border areas, carrying their hunting rifles and even threatening with them migrants.