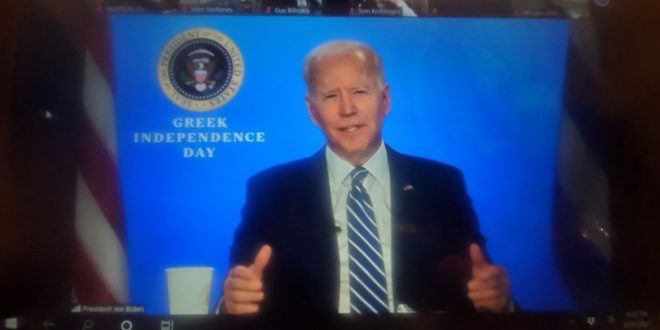 Greek Prime Minister Kyriakos Mitsotakis and US President Joe Biden on Thursday night held their first phone call since the latter took office in January. The US President invited the Greek PM to the White House and held an online event replaceing the traditional reception to commemorate the Greek Independence Day.

According to government sources, the phone call lasted half an hour and was held “in very good atmosphere.” Mitsotakis was expected to raise the issue of Turkish activity in the eastern Mediterranean and of expanding the strategic cooperation between Greece and the United States.

At an online event the White House held to celebrate the 200th anniversary of the Greek Revolution, Joe Biden said that he was the Greek PM in Washington as soon as the pandemic allows.

Addressing the more than 100 members of the Greek-American community who participated at the online event and referring to his phone call with Mitsotakis, Biden said:

“He is going to come to see me. He wants to come. We are trying to work it out when the Covid will allow that to happen.”

Biden told Mitsotakis that it seems strange for him, a student of both Greek and American history, the idea that we are celebrating Greece’s independence that is only 200 years old.

He expressed his desire to build an even stronger relationship to promote the common interests that the US has with Greece, noting that this was the main issue he discussed with the prime minister.

Biden said that, under his government, the two countries will be as close as possible. “I promise you that. I am committed to building a stronger partnership than we already have and to promoting our common interests.”

In a reference to the Cyprus problem, Biden said “I have not given up yet.”

He noted that Greece is a crucial NATO ally and a force for stability in the Eastern Mediterranean. 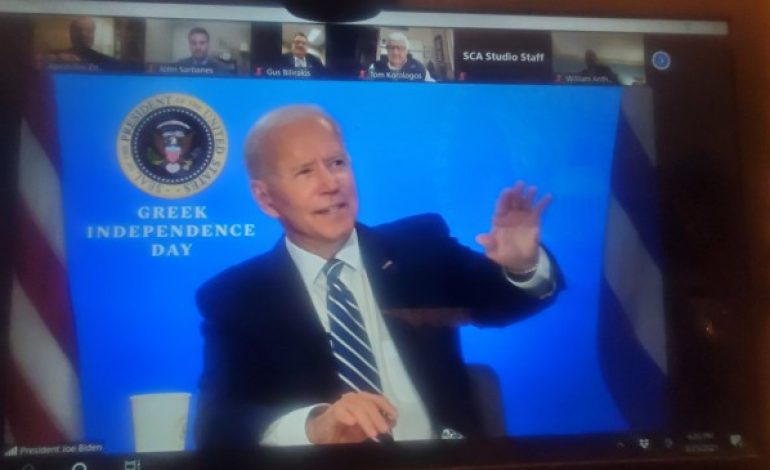 “To all my Greek friends in the United States, Happy Greek Independence Day”, President Biden wished.

He praised the Greek American Community that is defined by courage, honor and an immense pride of their Greek heritage. He paid tribute for the Greek immigrants and their contribution to the United States.

“The U.S. and the world owe a debt of gratitude to Ancient Greek ideals that first taught us who we are as a people, the Demos and as a Democracy we can control our own destiny.”

“We celebrate a really share value of liberty, and self governance in the awesome capacity of human spirit. We celebrate the heroism of the Greek people, mot just fighting for their independence two centuries ago, but in defending the cause of freedom. Because of our shared history we also share hope and optimism for the future; knowing that generation after generation, our people will continue to stand up for what’s right.”

President Biden expressed his regret that he could not host the members of the Greek-American community at the traditional event held every year at the White House for the March 25 holiday, saying “I promise that next year, with the pandemic behind us, we will have one significant celebration.”

More on the WH online event at greeknewsonline.