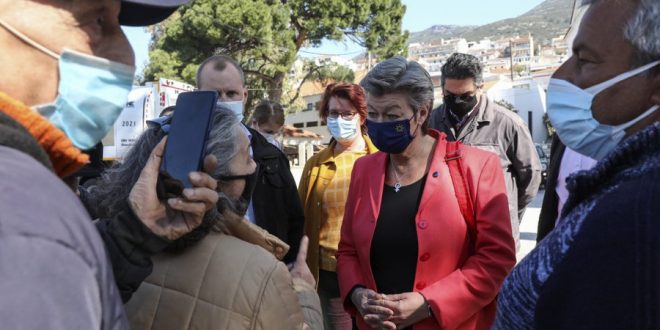 March 30, 2021 CORONAVIRUS, FEATURED Comments Off on EU commissioner Johansson met with with protests while visiting camps on Lesvos and Samos 1,093 Views

The visit of EU Commissioner for Home Affairs Ylva Johansson on the island of Lesvos and Samos  was met with protests by both locals and refugees. As the Commissioner visited the camps to discuss the new EU Pact on Migration and Asylum and funding to Greece, charities warned that the camps for asylum-seekers are a “recipe for disaster.”

Video snippet of how the young residents of the #Mavrovounj refugee camp on the Greek island of Lesbos viewed the arrival of the EU migration commissioner @YlvaJohansson and the Greek Migration Minister on Monday.

The EU is to give Greece funding to build five new refuge camps on the Aegean islands. to announce that the EU would provide €250m of funding (£213m) for five new structures on the islands of Lesbos, Samos, Chios, Kos and Leros.

A large crowd of demonstrators gathered outside the town hall on the waterfront in Mytilene, the capital of Lesbos, to protest against her visit. Some wrapped themselves in Greek flags and others held signs calling for European solidarity. 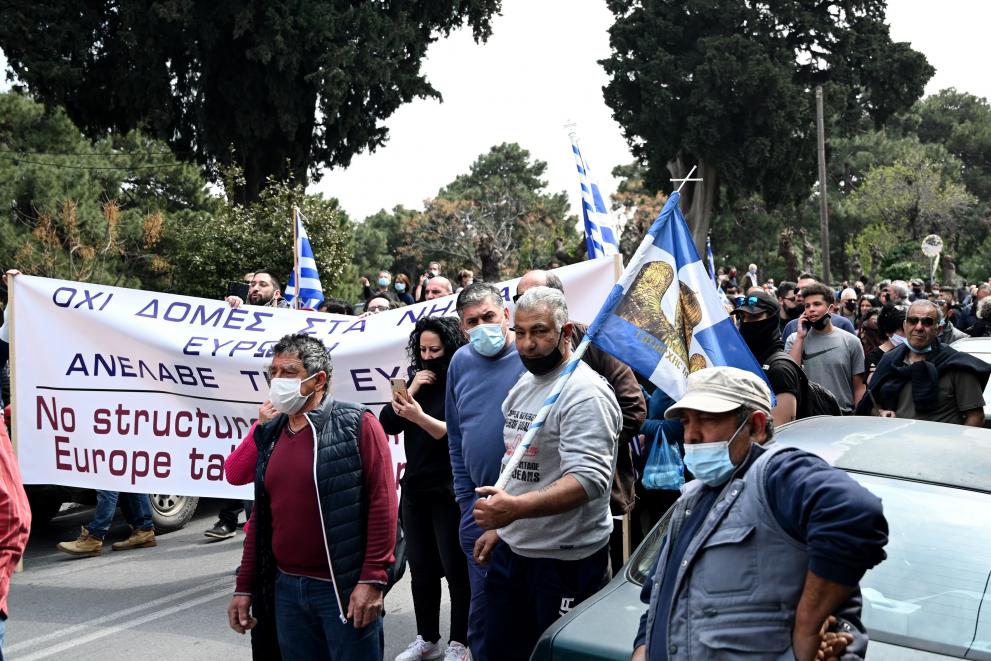 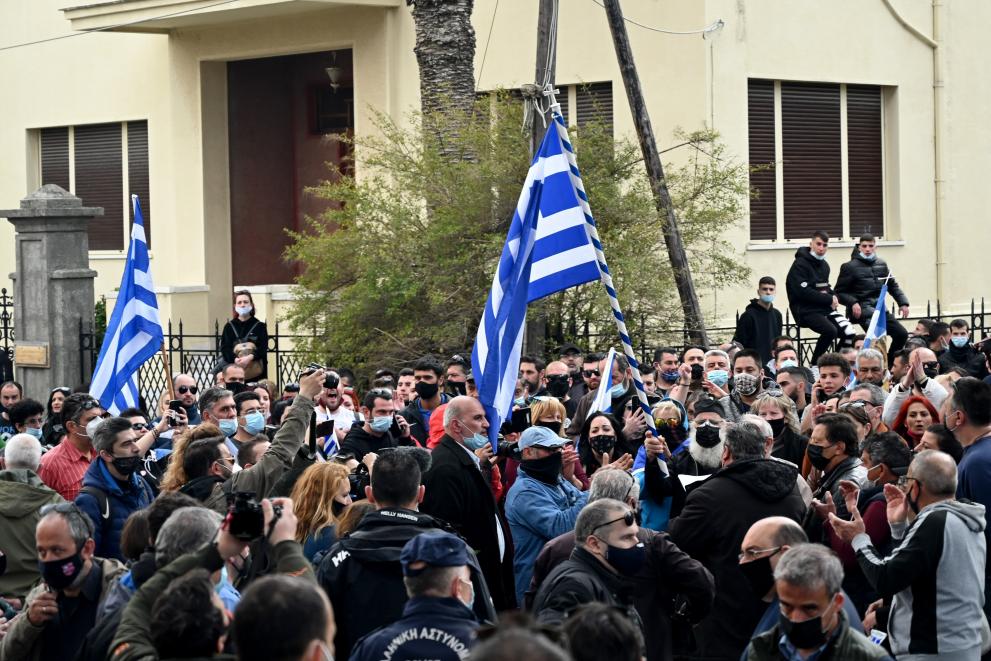 One sign read: “No to European Guantánamos. Shame on you, Europe.” Another said: “No structures on the island, Europe take responsibility.”

Kostas Moutzouris, the northern Aegean’s regional governor, told the Guardian he had cancelled his meeting with Johansson during her visit. “We don’t want the money for new camps – we want it for what we suffered all these years but not to build new camps,” he said.

Also on the island of Samos, locals staged protest.

Worth noting that journalists covering Johanssons’ visit complained that they were not allowe dot speak with people living in the camps. Also with Commissioner did not speak with them.

Will there be time for you to directly speak to some residents of the camp? There’s plenty of English-speaking people in both sites. https://t.co/9CIGXOE3Ep

At a joint press conference with the Greek immigration minister, Notis Mitarakis, Johansson said it was of “utmost importance” that people were not in the “temporary” camp built in the wake of the Moria fire for another winter.

An agreement for €155m for the construction of camps on Lesbos and Chios had just been signed, she said.

She said there should be “quick and fair” asylum processes, and that the EU was calling on Turkey to resume accepting migrants from Greece. “Even if you are not eligible [to stay in Greece] you are a human being – you have rights and dignity and should be treated accordingly,” she said.

Mitarakis said the new centres on Samos, Kos and Leros would be ready within the three months and would offer “dignified” living conditions, but entry and exit would be controlled, with fencing around the camps.

“For those that believe we are creating a new Moria, it will be shown in practice that you are wrong,” he said.

Rights groups have criticised the temporary camp on Lesbos that has been called “Moria 2:0” for substandard living conditions. Mitarachi said there were too many “semantics” around the new camp, which would “have a central gate”, he said. He said every asylum seeker would have a card stating the hours they could leave the centre to provide a sense of safety for refugees and the local community.

“Thousands of men, women and children continue to suffer every day in Europe’s camps in Samos and Lesbos while nothing seems to indicate that the model of containment that created hells like Moria and Vathy and recurrent emergencies over the past five years has ever been called into question by the EU,” Oberreit said.

“We have said it several times: continuing to clone and repackage the containment model is the best recipe for a catastrophe. It is time to demand dignified alternatives to camps and access to a fair and dignified asylum procedure, otherwise those seeking safety in Europe will continue to suffer.”

At a meeting with Prime Minister Kyriakos Mitsotakis, both side reportedly agreed agreed that substantial improvements are needed on the basis of solidarity, so that front-line member states are not solely responsible for managing the migration problem.

They also stressed the need for full implementation of the EU-Turkey Joint Statement of 18 March 2016 for the effective management of the problem and they discussed developments regarding the reception of refugees and migrants in Greece.

The prime minister spoke about a compromise solution that will be based on the fair distribution of the burden among EU member states.

On her part, the EU Commissioner noted that there is very good cooperation on many issues adding that in the last year the EU and Greece have achieved a lot together, such as decongesting the islands, but also on the occasion of the fire in Moria, the construction of new structures.