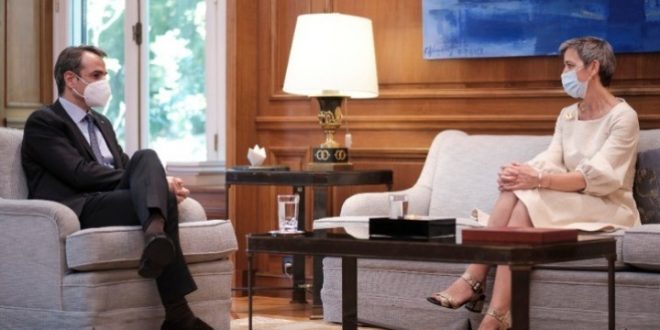 May 14, 2021 Economy Comments Off on Commission Vice Vestager: Greece may have highest growth rate in Eurozone 703 Views

“Greece may be the country with the highest growth rate in the eurozone next year,” Margrethe Vestager, Executive Vice-President of the European Commission for a Europe fit for the Digital Age said on Friday during a meeting with Prime Minister Kyriakos Mitsotakis, at the Maximos Mansion.

“Both the management of the pandemic and the current situation in the country are impressive. Really impressive,” she added.

On his part, the prime minister underlined that: “With great pleasure, I can say that I believe that the worst is over and now the economy is moving towards a very fast recovery. I am very optimistic οver the prospects of the Greek economy. And because we never stopped implementing reforms during the COVID-19 pandemic, we are now able to take advantage of the post-pandemic recovery.”

A day earlier, the Managing Director of the European Stability Mechanism (ESM) Klaus Reglingger said that  “Greece’s public debt may be the highest in the European Union by far, but remains viable even after the coronavirus pandemic crisis.”

Addressing the Delphi Economic Forum in Athens Regling said that “three reasons have helped its viability: the country’s very good fiscal state in 2019, before the crisis erupted; the structure of the Greek debt following its restructuring, particularly the fact that half (55%) relates to low-interest and long-term loans ESM has provided; and the European Central Bank’s monetary policy and the emergency measures it applied during the crisis, which helped de-escalate Greek bond interest rates.”