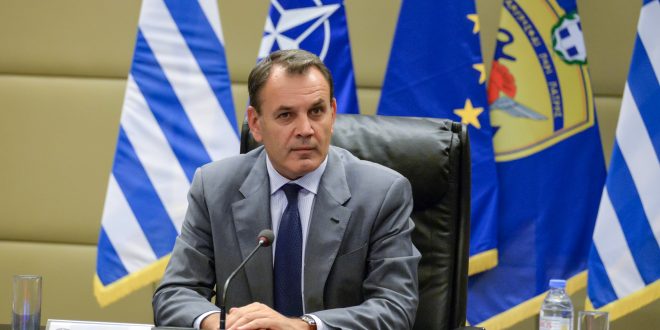 “What is threatened is not demilitarized,” says Greek Defense Minister

May 16, 2021 Greece, Politics Comments Off on “What is threatened is not demilitarized,” says Greek Defense Minister 873 Views

National Defense Minister Nikos Panagiotopoulos expressed the clear Greek position on the demilitarization of islands in the eastern Aegean Sea. “What is threatened is not demilitarized,” he said at the Deplhi Economic Forum on Saturday.’

Responding to the criticism of his Turkish counterpart Hulusi Akar for the visit of President Katerina Sakellaropoulou, Prime Minister Kyriakos Mitsotakis, and himself to Greek islands, Panagiotopoulos said:

“No Turkish official can indicate a Greek official where to travel in Greece, we do not accept such suggestions.”

On the upgrade of the operational capabilities of the Armed Forces and especially of the Navy, Panagiotopoulos stated that a great effort has been made in this direction over the last two years.

Regarding the de-escalation mechanism created by NATO for Greek-Turkish relations, the Minister of National Defence stressed that “the Alliance does not want to see tensions between the allies” and clarified that “Turkey’s behavior is a destabilizing factor not only for peace and stability in the Southeastern Mediterranean but also for NATO cohesion itself.”