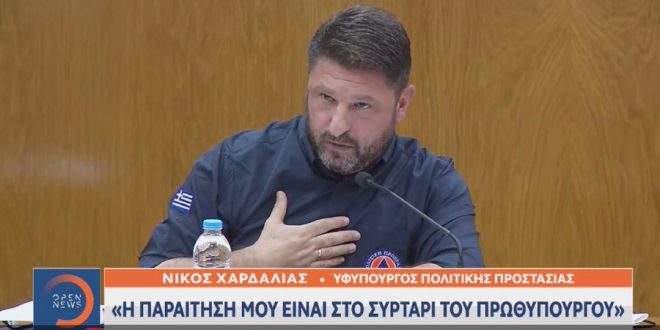 Civil Protection chief: Operations against the fires “by the book”

In a rare press conference in presence of journalists who were allowed to ask questions about the ongoing fires in Greece, Head of Civil Protection and Deputy Minister for Crisis Management, Nikos Hardalias, justified the operational management of the forest fires burning across the country since August 3.

The aim of the presser was to respond to sharp criticism by opposition parties and the residents of affected areas that not adequate ground forces and aerial fire fighting means were deployed to avert the burning down of thousands of hectares  of forest and agricultural land, houses and farming animals and wildlife and had thousands of people evacuate their villages.

He particularly focused on the logistics of firefighting by air, a source of criticism in the media from Evia residents and said that everyting was done by the book.

586 fires broke out between August 1 and 8, he noted adding “every day we had to deal with a three-digit number of fires, including fresh ones that reached 99 in one day alone.

Regarding the deployment of aerial means to drop water especially in mountain areas and dense forest, that where not accessible to ground forces he said:

74 airborne means of assistance were at the civil protection’s disposal as also some government minister said two days ago and was proud that Greece has the most aircraft per X population.

“They were reduced to 73 after the crash of 1 Pezetel (PZL) on Zakynthos [on Aug 8]” Hardalias said and added:

Regarding the persisting fires at the island of Evia, he said that trying to put out the fires by air has become impossible since Sunday, due to the thick clouds of smoke. When feasible, water-dowsing helicopters fly in through any available air corridor.

This explains why only firefighters on the ground have been operating at Evia over the last 3 days, he added.

Note that the fire on Evia started on Aug 3.

He gave several explanations to justify the non-deployment of aerial means -“due to heavy smoke in fire areas” or “the wind conditions” i.e. Beaufort intensity or ‘wrong direction’ -, the “extreme heatwave” and how perfect the evacuation of people at risk was.

He reiterated again that no life was lost and that priority was in the following order:

He had apparently forgotten the 38-year-old  volunteer fire fighter who was killed in NW Athens froma falling electricity poll and the 70-year-old man who was killed in Fokida, Central Greece, when he was trying to open an anti-fire zone with a tractor in a burned down area.

All in all and to summarize Hardalias’ one-hour presser in a few words:

We did everything perfect. Hadn’t we have prepared so good and hadn’t we be so direct and effective in our operations, you have no idea where the fires would reach.

Regarding his resignation as the chairwoman of KINAL/PASOK Fofi Gennimata demanded earlier today, Hardalias said that his “resignation is on top in the drawer of the Prime Minister.”