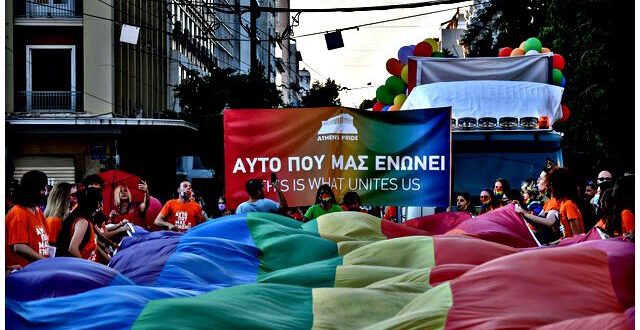 Under the slogan “this is what unites us” the Athens Pride Day and Parade 2021 took place on Saturday.

The parade started at Klafthmonos Square in the center of Athens at 19:00 and ended in the area of the Parliament at Syntagma Square.

There were no concerts or stands due to pandemic. The measures of social distancing and the use of face masks were supposed to be observed throughout the event.

Present were known and anonymous members of the LGBT community, representatives of organizations and progressive political parties.

Worth noting is that a day before the Athens Pride 2021, an open letter against same sex marriage was published on several media and circulated on Greek internet. The Letter was signed – or had the names – of “160 distinguished Greeks” as its title claimed. The full list included in the majority names of academics and army officers, hardly known to the public. By Sunday, at least three people stated that they were not against same sex marriages and that they were not asked by the organizers before their name was added on the list.