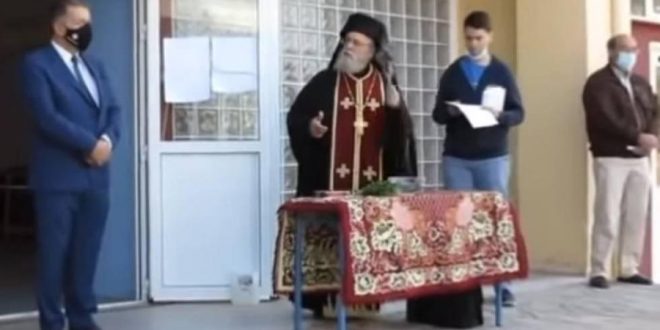 A local high-ranking clergyman in northern Greece created a  during the blessing ceremony at the new school year, when the director urged students keep their face masks on while kissing the Holy Cross.

Archimandrite of Amyntaio Sevastianos slammed the director of the Lyceum saying “should I hold the holy cross of Jesus Christ and wear a mask? “Will the cross infect people? Shame on you!”. He told her to “stop talking” when even the local dignitaries like the mayor and the deputy locla governor had removed their masks to kiss the Cross.

Sevastianos was also furious that he was asked to enter the classes and bless them thus wearing a mask.

Mayor of Amyntaio told Skai TV on Tuesday that “it is a matter of respect and not of health.”

The incident divided Greeks on social media with one part sharply criticizing the clergyman for defying health protocols against the pandemic and the other part congratulating him for doing exactly that.

Some posted that sevastianos is known in the area to be against the use of masks in churches.

PS He is apparently one of the priests in the country who keeps refusing to comply with health protection measures putting religion over science and claiming that faith alone can beat any illness and pandemic. *sigh*