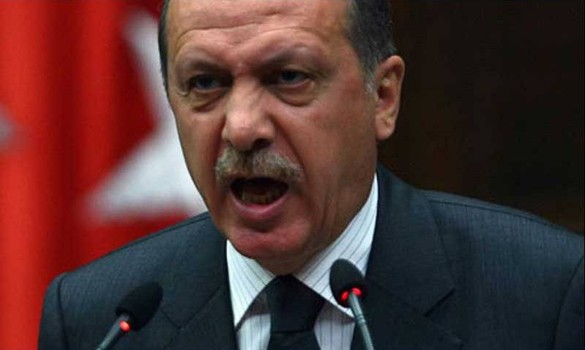 Turkey’s president Recep Tayyip Erdogan has filed a lawsuit against a Greek newspaper on Wednesday. The lawsuit submitted to a prosecutor’s office in Ankara refers to a front page of conservative daily “Dimokratia” two years ago. The lawsuit demands imprisonment of up to five years for four high-ranking newspaper staff “for insulting the President” and thus in Turkey.

Erdogan’s lawsuit targets the newspaper’s director, the chief editor who wrote the op-ed and two editors-in-chief, the newspaper said in a statement.

“Turkish President Recep Tayyip Erdogan is prosecuting the newspaper ‘Democracy’ [Dimokratia] and wants to sentence four of its staff to imprisonment in Turkey, which can reach up to five years, the newspaper said.

It added “this is the first time that a foreign head of state has turned against a Greek newspaper, and for political reasons, as it is clear from the text of the lawsuit sent by the Ankara prosecutor’s office.”

The reason behind this legal action “is Dimokratia’s September 18, 2020 front page title ‘Siktir Git, Mr Erdogan”, which expressed the indignation of the majority of Greeks for a series of insulting reports both by Erdogan himself and by his ministers or advisers, during the period of illegal sea surveys carried out by the Oruc Reis vessel,” newspaper Dimokratia pointed out.

The lawsuit was filed by one of Erdogan’s lawyers. The prosecutor in Ankara accuses the four Greek journalists of “the crime of insulting the president” under Article 299 of the Turkish Penal Code, “which has been denounced by the European Court of Justice and is the main legal tool for the extermination of Mr Erdogan’s opponents,” the newspaper noted.

The official legal text submitted to Greek authorities is full of provocations, the newspaper stressed as it refers to “the Aegean Sea” as “the sea of islands”, and the Turkish side accuses the Dimokratia’s journalists of creating obstacles to Mr. Erdogan’s aspirations in the Eastern Mediterranean and the Aegean.”

“Dimokratia refuses to participate in the relevant legal proceedings based on Erdogan’s parody lawsuit, and considers it an honor that the Turkish leadership characterizes our newspaper as an obstacle to its expansionist and dangerous plans,” the newspaper statement concluded.