The European Commission has forecast strong growth rates of 7.1% in 2021 and 5.2% in 2022 for Greece in its autumn economic forecasts, published on Thursday, revising its forecasts for 2021 upwards compared to those published in July (4.3%) and slightly downwards for 2022 (from 6%).

The Commission report coincides with the report of the Greek Statistics Authority ELSTAT published a day earlier that recorded an inflation of 3.4% in October, the highest rate in the last decade, and with increasing tendency.

According to the Commission’s report, “the recovery of the Greek economy is gaining traction, primarily driven by domestic demand and the better-than-expected tourist season. The impact of the pandemic is expected to gradually soften, while the accommodative fiscal and monetary policy, coupled with the strong boost from the Recovery and Resilience Plan, are set to sustain the momentum going forward. Emergency support measures are being adapted to the evolving needs of the economy, and expected to be largely phased out by the end of 2021, supporting the reduction of the general government deficit.”

The report stressed that the recovery of the Greek economy gained momentum in 2021, as “Greece’s economy rebounded strongly in the second quarter of 2021, by 3.4 pct compared with the previous quarter. Real GDP reached its pre-pandemic level in the second quarter of 2021. The recovery was driven by domestic demand, in particular investment, and by the accumulation of inventories, while the ongoing fiscal stimulus provided a crucial role in supporting the economy.” 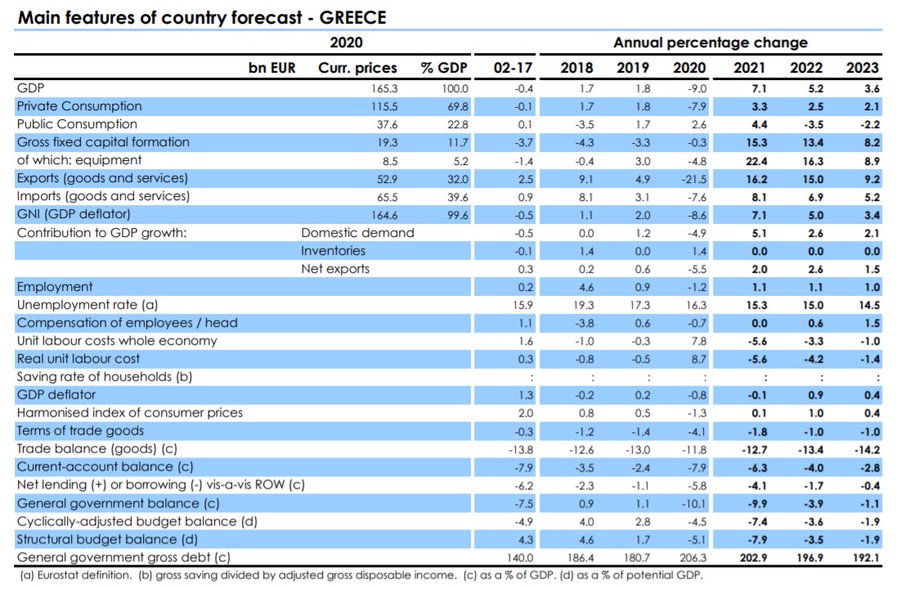 Inflation in Greece reached a 10-year high in October, amounting to 3.4% year-on-year, the Hellenic Statistical Authority (ELSTAT) showed on Wednesday, mainly due to doubling of natural gas rates and hikes in fuel and food prices – the latter is expected to pile the pressure on vulnerable households that need to spend most of their budget on food purchases.

According to the data released, the price of natural gas has risen 132.3% in a year and heating oil has become 45.9% more expensive. The cost of vehicle fuel has grown 22.3% and electricity by 18.9%.

There are now major hikes in food prices too: Olive oil and vegetables posted respective price increases of 22.1% and 9.3% last month, continuing their rising streak; they are now being joined on their price trajectory by potatoes (9.1%), bread (3.9%), poultry (8.5%) and fish (7.9%). In total, the “Food and Non-Alcoholic Beverages” category showed a 3% price increase compared to October 2020.

“Worse, despite original estimates that the consumer price index would decline toward the end of the year, all signs point to the exact opposite,” notes daily kathimerini. According to representatives of major supermarket chains, consumer prices have not yet incorporated the hikes included in suppliers’ price lists; that is now expected by the end of the year. Furthermore, some enterprises that have not yet raised their prices because they had stocks of raw materials bought cheaper will implement price hikes next year.

The last time inflation was above 3% in Greece was in October 2011, the newspaper recalls adding “International news leaves little room for optimism. While natural gas rates have started declining, thanks to the change in Moscow’s supply policy, that is not the case for the global rates of a series of raw materials essential for food products.”