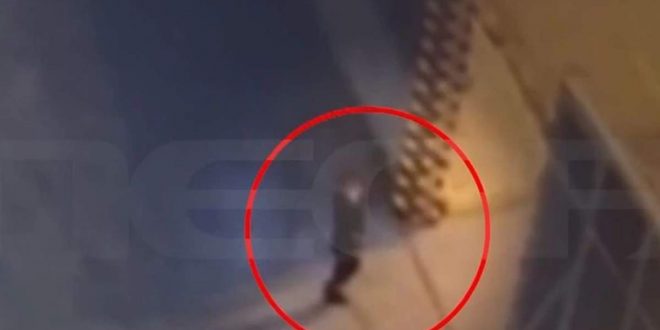 UPD 8-year-old Roma girl crashed twice by factory door, left there for over an hour (videos)

An 8-year-old Roma girl found a tragic death when its body was crashed by an electric factory door in Keratsini suburb of Piraeus on Wednesday, November 17. Serious questions arise from the fact that the girl’s body was crashed twice by the metal door and its body remained there for as long as 2.5 hours until it could be released, as footage from security camera shows.

The family of the girl is seeking for answers as to why their daughter was left helpless, crashed by the door for such a long time and raise questions whether there was a racist motive behind the workers’ indifference.

It looks as if the Roma girl died on the spot immediately the first time it got trapped. An autopsy is to determine the exact cause and the time of the death.

Police arrested on Sunday the 44-year-old factory worker who operated the door for “negligent by neglect” as well as the girl’s mother and grandmother for “neglecting a minor.” The two women were later released by the prosecutor’s order.

The factory is 2 km away from the girl’s home, state broadcaster ERT reported.

Arrested have been also the man in charge of the factory as well as a truck driver who opened and closed the door again crashing the child for a second time.

UPDATE: According to the autopsy report, the girl died slowly due to internal bleeding, so Alpha TV on Tuesday evening.

The footage shows that:

-At 17:30 the factory worker pressed the button to close the factory door and headed inside the warehouse, leaving the sliding door unattended.

-A few seconds later, and while the door is slowly closing, the 8-year-old girl runs into the factory. She stands in front of the door and just before the door closed completely the child, at 17:31, decides to leave the factory, but she doesn’t manage as the door closes and traps the girl.

– At 17:50, the worker walks in front of the door, where the trapped child is, looks but he does not seem to realize what has happened.

-At 17:52 the workers passes again by the door, it seems that he discovers the child’s body and returns to the building, picks up the phone apparently to inform somebody.

-At 17:54 a second man seems to passes by and talks on the phone. A minute later someone opens the sliding door, freeing the child’s body.

–From 18:05 until 18:11 people inside the factory pass by the girl’s body without doing anything.

-At 18:31 a truck enters the factory through the open door, the driver closes the metal door again and traps the body of the girl for a second time.

The workers thought that it was a bag trapped by the door.

Shocking video obtained exclusively by MEGA TV shows how the girl enters the factory at 17:30 Wednesday afternoon and is crashed. The video has been edited due to the graphic scenes.

According to ANT1, “the most unthinkable is that those in charge needed 2.5 hours to find out how the sliding door can be opened to free the 8-year-old girl!”

In statements to ERT, to ANT1 and several other media the family’s lawyer has wondered why those in charge did nothing to see what was trapped at the door and for so long.”

He added that he is waiting for the autopsy result and the police and prosecutor’s report.

A few flowers and a candle outside the factory where the little Roma girl lost her life.

Angry family members of the 8-year-old girl gathered outside the factory on Monday morning and one of them tried to crash with his car on the metal door. Another one threw coffee at a worker.

The family expressed suspicion that somebody was chasing the girl and that’s why she was sought short refugee in the factory when she saw that the door was open.