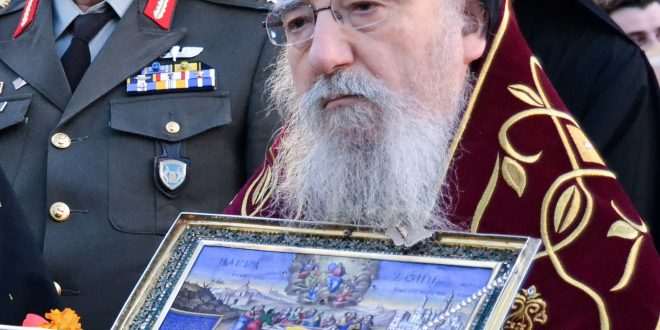 A well-known anti-vaxxer Bishop of the Greek Orthodox Church was infected with Covid-19. It needed a prosecutor’s order to be transferred from his home to the public hospital. Until the very last moment, the 80-year-old Bishop and but also his relatives were opposing his intubation which doctor considered as essential. At the end, the Bishop ended in an ICU bed in the biggest hospital in Athens Evangelismos.

And then the hell broke out.

Hospitals Workers Union POEDIN made a denouncement saying that a 58-year-old vaccinated Covid-19 patient was intubated outside the ICU in the same hospital of Agrinio, western Greece, and claimed that the waiting list was skipped. POEDIN stated citing data from the Health Ministry that 120 intubated Covid-patients in hospitals were waiting for an ICU bed and wondered how the Bishop managed to get one so quickly.

The man’s wife went to media and complained that her husband was “bypassed” on the line for a bed at the Intensive Care Unit for the sake of the Bishop.

The 58-year-old man infected with Covid-19 was intubated outside the ICU and was treated in a normal ward, she told Mega TV on Friday noon. The father of two aged 13 and 19 has underlying health issues and his condition is considered as particular critical.

“I’m a practicing Christian, but our Bishop was treated preferentially compared to my husband and he found immediately an ICU bed,” the woman said.

“He is a bishop and will find an ICU bed like a politician. We are nothing. We can’t find one. We don’t have such luxury,” Mrs Niki said in bitterness.

“We’re just waiting for a bed and if we don;t find one they will take him off the intubation here in Agrinio if two Rapid tests turn negative,” she added

She said that her husband was struggling with Covid-19 for 30 days and he was already once in the hospital from where he was discharged. His condition deteriorated and was admitted again with an ambulance on November 18.

“On Nov 22 I spoke with the pulnonologist at the hospital who told me his condition had improved, that he had to be discharged and continue his therapy at home,” the woman said.

The man returned home dirty and hungry, “the ambulance took him form hospital with oxygen at 83 that had dropped to 82 upon his arrival at home. She called the hospital and he was admitted again on Nov 23 at night.

The woman added that her husband and she were fully vaccinated, her son had an appointment for the 2nd vaccine dose and the girl for her 1st dose.

Probably after some “higher” human intervention and due to the outrage over the Bishop’s preferential treatment, an ICU bed in the hospital of Ioannina, some 200 km away, for found and the 58-year-old man was transferred late on Friday night.

According to union POEDIN, over 120 intubated Covid-patients were being treated outside of ICUs on Friday with the majority of them in normal Covid-wards together with other patients.

“The elderly intubated are never transferred” to the ICU, the union stressed.

“The Bishop at his 80’s to whom we wish best recovery form the bottom of our hearts, unvaccinated and fierce opponent of the vaccination and the coronavirus was admitted to hospital Wednesday noon and by evening he found an ICU bed in the most organized ICUs of the country,” POEDIN said adding that “other intubated patients outside ICUs are not so lucky.”

Health Minister Thanos Plevris said on Saturday that he “was not aware” of the incident withe Bishop.

The 80-year-old Bishop of Aetolias and Akarnania Kosms was preaching against the use of masks and the vaccinations, claiming, among others, that “God doesn’t allow infections inside the church.”

In one of his speeches that were broadcast also by local media and on social media channels, he was saying “God does not infect! Let’s get clear with this! The Church is holy, it’s heaven!”

Some locals told media that the Bishop was scandalizing the local community with the effect that the vaccination rates were low in the area of his influence.

On Friday, also the Bishop’s sister, a 75-year-old infected with Covid-19, was also transferred to hospital.

As expected, the case triggered an outrage on social media, with many suspecting political intervention in favor of the notorious anti-vaxxer Bishop.

Furious Greeks took the debate a step further wondering whether an anti-vaxxer should be allowed to “steal an ICU bed” from a vaccinated citizen, as they characteristically write.

Unfortunately, those who so division harvest also division…