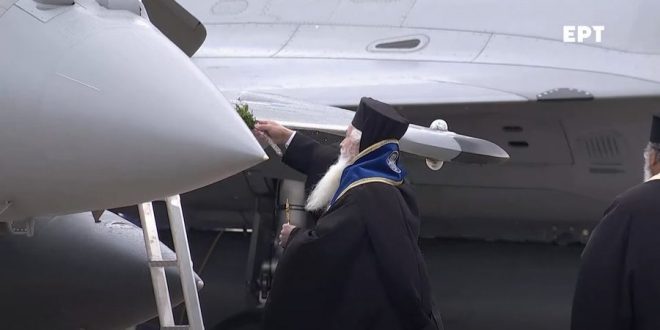 The roaring sound of Greece’s first six Rafale flying over the Acropolis at Wednesday noon were heard all over the Greek capital. It must have been the most expensive sound ever heard. The flying cost for each super-fighter jet per hour is estimated to be at least 14,000 euros.

The flying over the Acropolis was a symbolic but sound message of Greece’s defense power, media reported.

The Rafale jets took off from Istres in France and landed at the 114 Tanagra Air Base in north Attica after a spectacular fly over the sacred rock of Acropolis. 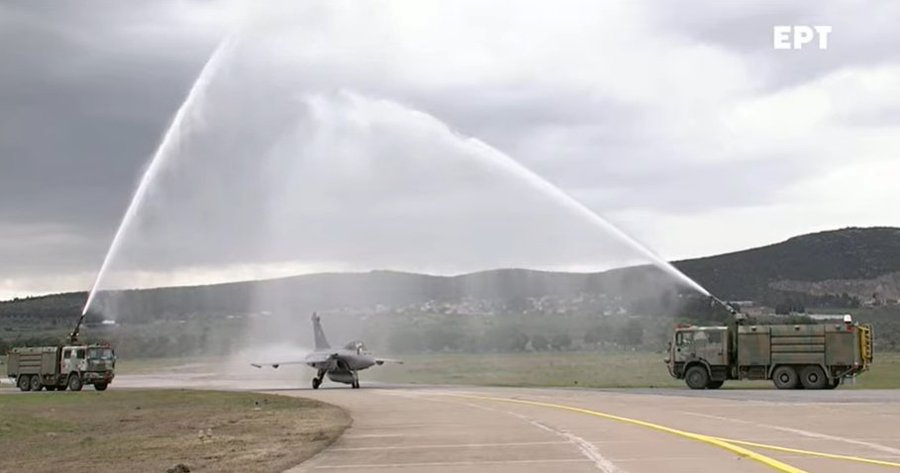 There at the Tanagra Air Base, the landing Rafale were welcomed with a water salute and later blessed by priests who sprinkle the super-weapons with Holy Water. 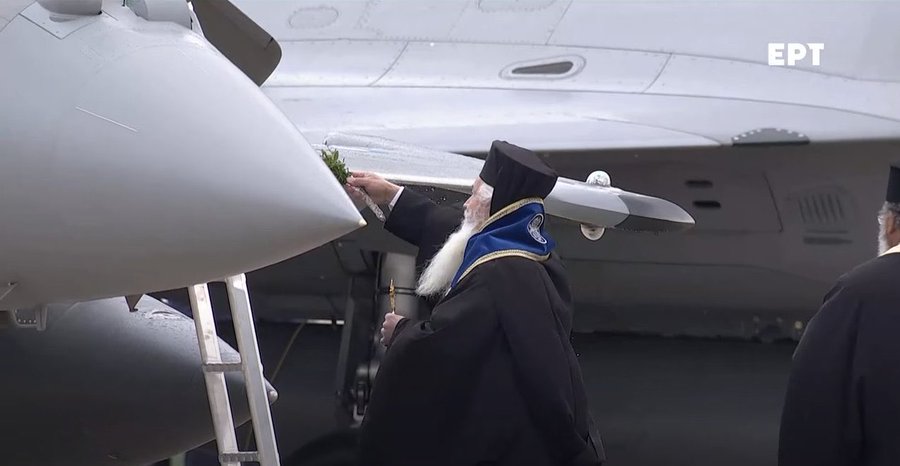 What do French Dassult manufacturers know about technology, advanced electronics and weapons systems? No Rafale would be safe in the sky without the Greek Orthodox Holy Water sprayed by respectful elders. 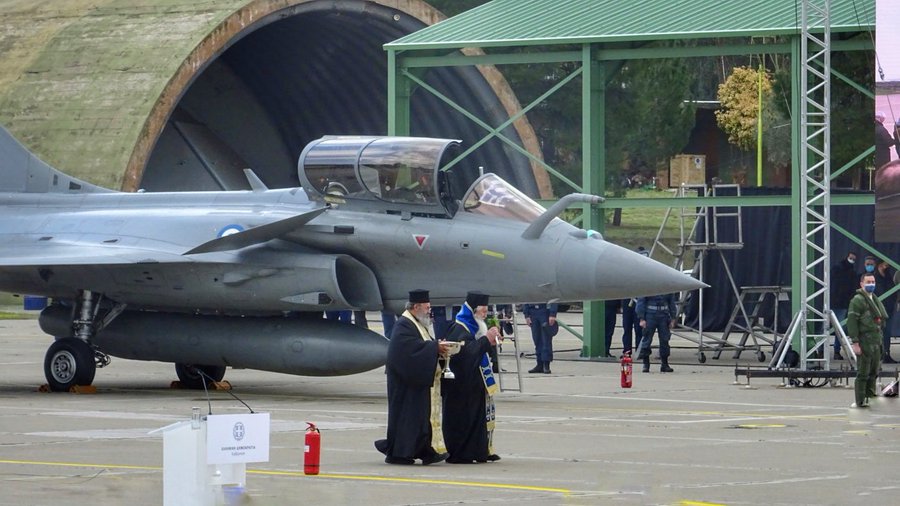 What do French Dassult manufacturers know about technology, advanced electronics and weapons systems? No Rafale would be safe in the sky without the Greek Orthodox Holy Water sprayed by respectful elders.

The welcoming ceremony was broadcast live on state ERT TV with glowing hails like “historical moments” and “national pride.” 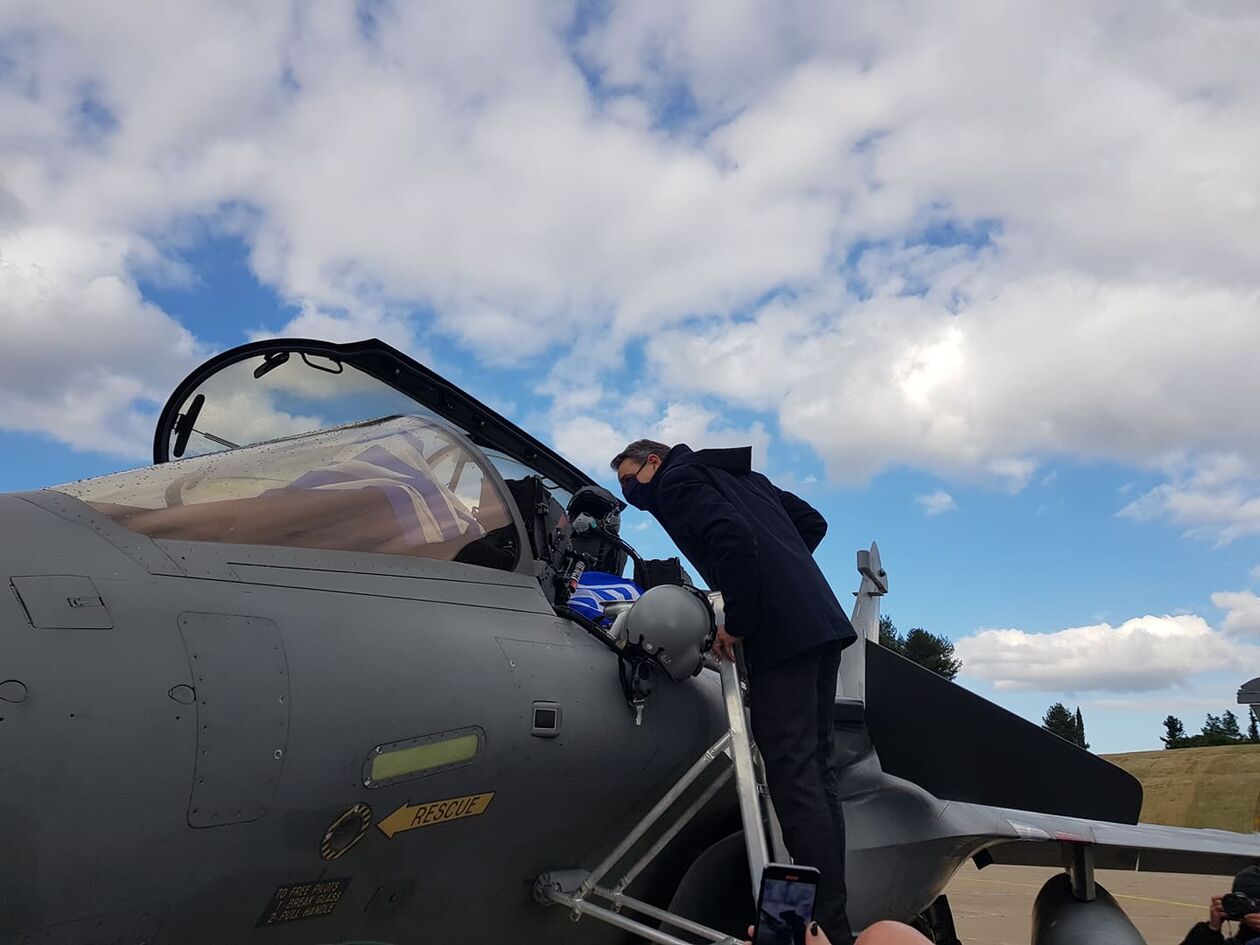 “The country is proud to welcome the new acquisitions, the first 6 of the 24 state-of-the-art Rafale”, said Prime Minister Kyriakos Mitsotakis at the beginning of his speech, talking about a power multiplier “that upgrades the country at a geopolitical level.”

“This is a clear example of Greece changing and flourishing both defensively and diplomatically. The new aircraft are here 16 months after their order, ready for battle as the crews and support teams have completed the training,” he stressed adding that the remaining aircraft will arrive in 2022.

Greece’s purchase of the flying super-weapons certainly changes the military balance in the region, especially regarding neighboring Turkey.

But a “bread and circuses” fiesta, while 1 in 3 Greeks are at risk of poverty due to pandemic effects, many cannot afford heating and are unable to pay electricity bills due to soaring energy prices and the daily number of deaths due to the coronavirus is shocking. Not to mention the more than 16 people who died since the heating period started in November due to cheap heating devices.

Meanwhile, opposition parties SYRIZA, KINAL and KKE sharply criticized the government for the ‘fiesta’ and lashed out at a Rafale promotion video upload by ruling New Democracy with the party logo on it.

“The money for the Rafale jets was paid by the Greek people, not by New Democracy,” all three opposition parties stressed.

PS According to unconfirmed rumors, blue beads against the evil eye and garlic against vampires will be hanged at the new fighter jests later…

Benefits of Blessing the Rafale jets