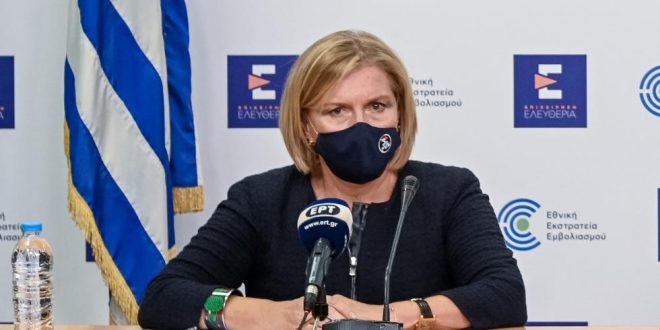 Alternate Health Minister Mina Gaga said on Wednesday that the fine of 100 euros for unvaccinated citizens over 60 years old will be abolished next month. The fine was practically making mandatory the vaccination against COVId-19 for citizens over a certain age.

Speaking to Skai TV on Wednesday, Gaga confirmed what another high-ranking health official had hinted a day earlier. She said that the “administrative fine will be abolished in April.”

The fine was introduced s of January 15 in order to enforce seniors to vaccinate against the pandemic virus.

The blackmailing measure did not work as much as the government had imagined it would.

For January the fine was 50 euros and 100 euros for each month to follow in which the citizens remained unvaccinated.

The fine was booked through the electronic systems directly to the citizen’s tax office account.

The revenues from the measure, estimated over 3 million per month, were supposed to be used to strengthen public hospitals.

OF course, the government has to abolish the measure when it plans to abolish also the Covid-Pass to access closed spaces in restaurants, shops and other venues, and lift all restrictions due to the tourism season.

On top of this comes the Omicron 2 reality that even people who have been administered 3 or even 4 vaccine shots get infected.

Health Minister Thanos Plevris announced Wednesday noon that the fine will be abolished on April 15. He added later, that the fine could return in September.

Does this mean that 50 euros will be charged for the first half of April? Nobody knows. We are in Greece and proper communication messages to citizens is not this government talent.

UPDATE 2
A few ours later, the health ministry let know that the debts caused by the fine will not be written off.